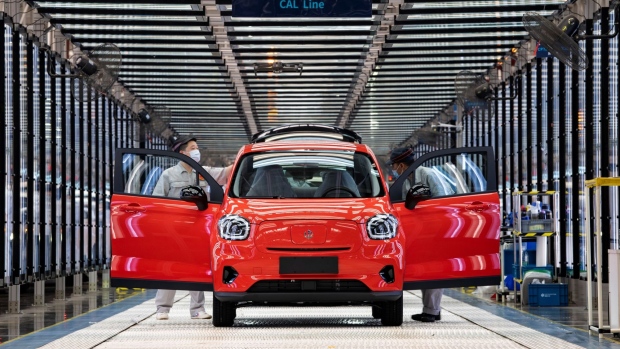 (Bloomberg) -- An EV maker and a unit of China’s real estate developer China Vanke Co. plunged in their trading debuts in Hong Kong, following IPOs that together raised more than $1.5 billion.

Chinese electric-vehicle maker Zhejiang Leapmotor Technology Co. ended down 34% at HK$31.90, after plunging as much as 42%. The company raised about $800 million after selling shares at HK$48, the bottom of a marketed range. Leapmotor’s slide capped the biggest first-day decline for a listing of that size or bigger on record in Hong Kong.

The Chinese companies are starting to trade in what’s been a tough year for IPO performance and equity markets in general. Before Thursday, half of the 16 firms that listed in Hong Kong this year following IPOs that raised over $100 million ended their first session below water, with three unchanged and five rising above their listing price, Bloomberg data show.

Onewo Inc., China Vanke’s property management unit, finished 6.8% lower at HK$46. The firm garnered about $739 million, with shares priced at HK$49.35, the mid-point of a price interval given in the offering.

In Leapmotor’s deal, the portion reserved for individuals was undersubscribed, with about only 16% of the 13.1 million shares in the public offering placed, according to a statement on Wednesday. The tranche for funds was “moderately” oversubscribed, the document reads.

“Leapmotor’s IPO was expensive even after pricing it at the bottom, and the Hong Kong offering was significantly undersubscribed, which suggests that investor sentiment was weak,” said Shifara Samsudeen, an analyst at LightStream Research. The company’s “market share expansion comes at the cost of its margins and it is struggling to make gross margins while all its domestic peers are making decent gross profits,” she added.

Leapmotor’s debut tumble casts a shadow on the expected start for CALB Co., a Chinese battery supplier for electric vehicle makers slated to start trading in Hong Kong next week. The company priced its $1.3 billion IPO at the bottom of the marketed range on Wednesday, the third-largest offering in the city this year.

The trading starts come as equities globally are pressured after hawkish comments from Federal Reserve policymakers led to a surge in Treasury yields, and a gauge for the US dollar set an all-time high. The Hang Seng Index fell slumped 4.2% since Tuesday’s close, finishing at the lowest level in a decade.

China’s real estate sector has been under pressure this year, most recently as Covid lockdowns hurt home sales by already cash-strapped builders. But Vanke last month stood out as the first top-tier China property developer to report stronger earnings, defying a downturn that’s engulfed peers once seen as relatively safe.

Onewo’s IPO saw better demand than Leapmotor’s. About 82% of 11.7 million shares offered to the public were placed, with demand from institutional investors topping 3.3 times more than those available, a statement showed.

“Both IPOs were not cheap,” said Ke Yan, head of research at DZT Research in Singapore. “The market is not lacking another EV name and a property management name. The management and bankers were successful in getting investors buy-in, but results didn’t turn out to be good.”