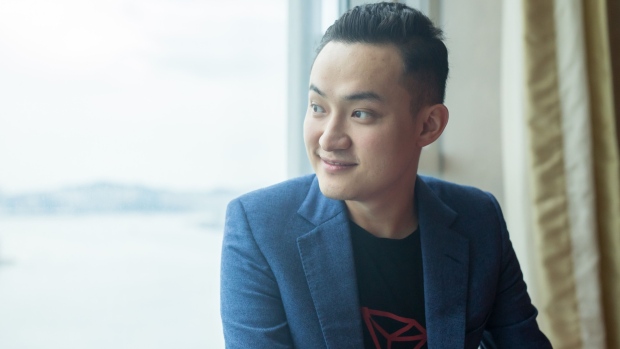 When Justin Sun met Warren Buffett for dinner in January, he wasn’t seeking advice on stocks. The crypto mogul had spent a record US$4.6 million at a charity auction for the opportunity to lecture the world’s most famous investor on the benefits of Bitcoin.

It was exactly the sort of behaviour that Sun’s known for -- abrasive, ostentatious and, ultimately, impossible to ignore. Like the US$200-billion crypto industry itself, he is young and hungry for the respect of traditional financiers like Buffett, who deems Bitcoin basically worthless.

Still shy of his 30th birthday, Sun founded one of the largest blockchain platforms, Tron, in 2017 and turned it into a virtual Las Vegas with gambling apps. He’s rubbed shoulders with Apple Inc. and Alibaba Group Holding Ltd. founders, hired celebrity endorsers like the late Kobe Bryant and drawn accusations of plagiarism, which he has denied, more than once. What he says and does can move crypto prices, and his aggressive acquisitions have earned him both admiration and notoriety in the blockchain community on his way to consolidating power.

“I’m a true believer of blockchain. It’s once in a lifetime,” he said in a rare in-depth interview from a luxury office suite overlooking Hong Kong’s Victoria Harbour. “It’s only people who don’t understand it who question me.”

Making his personal fortune by embracing Bitcoin as early as 2012, and now by his own account worth somewhere in the hundreds of millions of dollars, Sun is part of a second wave of crypto entrepreneurs who envision putting more than just digital money and payments on a decentralized platform. Last week, Sun and his team touted an upcoming major update to Tron, which will include more privacy features and enterprise applications.

Newer blockchains like Tron let developers build so-called decentralized apps, or dapps, on their platforms. Ethereum is the foremost among them, with its co-founder Vitalik Buterin offering a simple analogy: if Bitcoin is a pocket calculator, platforms with dapps are akin to smartphones. But unlike Android or iPhone apps, dapps are decentralized in the sense that they aren’t run on one server or by any single entity.

Sun’s Tron has 342 active dapps and more than 230,000 users, both roughly half Ethereum’s totals, according to data tracker Dapp Review. It’s been accused by researchers like Digital Asset Research of copying Ethereum’s code without attribution, and by Buterin himself of stealing words from other projects’ whitepapers. Tron and Sun have denied both accusations.

The bulk of business done on Tron today revolves around the largely unregulated field of crypto gambling, with a January Dapp Review report describing it as “Las Vegas on the blockchain.” In the first quarter, casino dapps comprised 92 per cent of Tron’s US$411 million total transaction volume, according to the Binance-owned researcher. 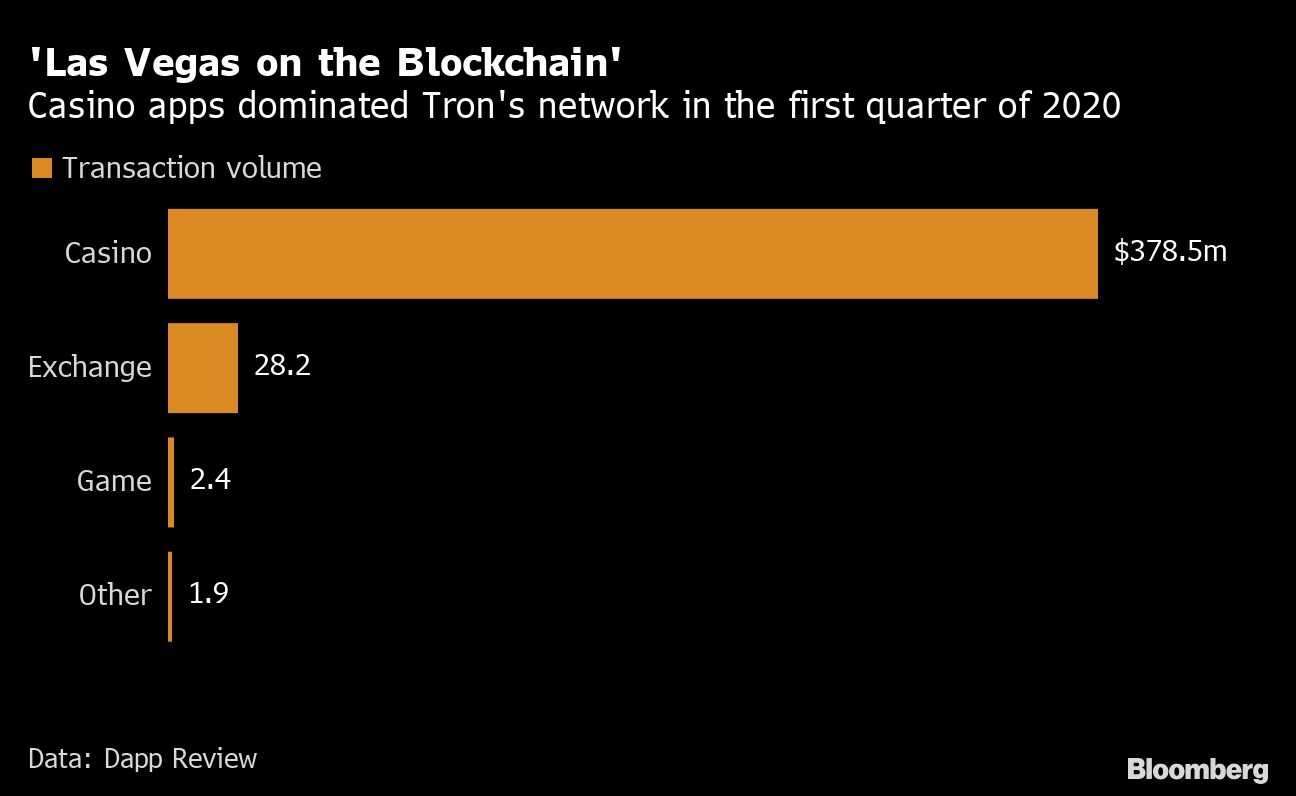 Since its inception, Tron has been augmented with the acquisitions of live-streaming service DLive, briefly the exclusive online home of YouTube star PewDiePie, and file-sharing service BitTorrent Inc. Through a partnership with Samsung Electronics Co., Tron dapps can be downloaded via one of the world’s most widely distributed mobile app stores.

Sun has proven himself an able marketer, raising US$800,000 in under five minutes through a public token sale for his lending platform, called Just. He also commands an audience of two million Twitter followers.

But he’s also been challenged on basic information. While Sun said he often covers the US$5-million quarterly operational costs for Tron, Ryan Dennis, a spokesman for the nonprofit Tron Foundation that coordinates the blockchain platform’s operations, denied that figure -- saying they won’t be able to get accurate cost numbers “due to the coronavirus pandemic changing everything on a day-to-day basis.”

As a sociology student in the U.S., Sun founded an online magazine about current affairs -- though it closed after he was accused of plagiarism by another author. Sun has denied the accusation, saying he merely imitated the author’s style.

He then made the switch to tech.

After an unsuccessful attempt to set up China operations for American crypto company Ripple in 2014, Sun went back to the drawing board with US$5 million of venture-capital money from backers like IDG Capital and ChinaEquity Group. He tried almost every hot idea in China’s internet space, finally finding success in Peiwo, which let users connect with random strangers via voice messages. That app would later be slammed by China’s top state news agency for spreading vulgar and pornographic content.

On social media, he billed himself as Alibaba co-founder Jack Ma’s first millennial protégé, since he was picked up in 2015 by the billionaire’s MBA program. When fellow tech entrepreneurs ran into cash crunches, he was often quick to say he would lend them money. He said he had a 100 million-yuan (US$14 million) charity budget for 2019, part of which was distributed in cash giveaway campaigns via his Weibo account.

Sun’s dinner with Buffett is still the banner image on his Twitter profile. The meeting had been scheduled for last July, but three days before the planned date Sun rescheduled, citing a bout of kidney stones. Later that week, he took a selfie and then live-streamed himself with San Francisco’s Bay Bridge in the background to rebut a news report that he was under Chinese border control. He then apologized on Weibo to the Chinese regulators and public for his “excessive self-promotion.” He was banned from the microblogging site at the end of 2019. (Sun now has a team, including a photographer, to manage his Twitter and Instagram accounts.)

When Sun finally sat down with Buffett, his entreaties crashed against a wall of skepticism.

Sun shut down his Beijing offices last year, after China launched a renewed crackdown on a crypto industry it views with suspicion. He said he hasn’t returned to mainland China since the end of 2018, though he’s not prohibited from doing so.

During the COVID-19 pandemic, the jet-setting entrepreneur has been stuck in Hong Kong. But he has continued to stumble into controversy. In February, Sun bought the social network Steemit, billed as “owned and operated by its users,” along with 30 per cent voting control over its platform. Fearing that gave Sun too much power, part of the Steemit community temporarily froze his stake and then split the blockchain into a whole new branch.

“His playbook might be the optimal strategy during the early barbaric growth period of the crypto industry,” said Wayne Zhao, analyst and managing partner of researcher TokenInsight. “You are nothing without people’s attention, no matter if it’s good or bad.”