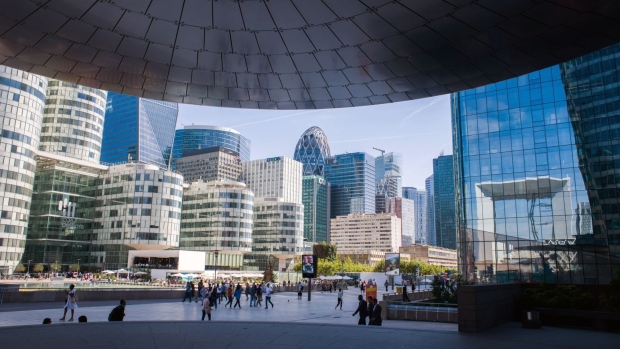 Office workers and visitors in La Defense financial district of Paris, France, on Wednesday, Aug. 24, 2022. The French government has set aside tens of billions of euros to shield businesses and households as the cost of French power jumped to a fresh record. , Bloomberg

(Bloomberg) -- Brexit has turned Paris into such a trading cluster, even Germany’s biggest bank is moving people there.

Deutsche Bank AG has begun positioning European credit traders in Paris, an unusual step for the German lender that underlines the French capital’s growing importance as a post-Brexit markets hub.

The Frankfurt-based bank has shifted part of its flow credit trading desk to the city, fewer than ten traders on current plans, country head Frank Krings said in an interview. The decision was made because of Paris’s large talent pool, he said.

“Virtually all of our relevant competitors have chosen Paris for credit trading,” Krings said. “To position ourselves away from key clients and where relevant talent sits would have been an odd choice.”

Deutsche Bank’s move, instead of locating Europe-focused staff in its home base of Frankfurt, highlights just how much Paris has benefited from the UK’s decision to leave the European Union. Global investment banks including JPMorgan Chase & Co., Goldman Sachs Group Inc., and Morgan Stanley have beefed up operations there.

While Deutsche Bank has moved most of the activities that needed to be moved post-Brexit to Frankfurt, Paris’ status as a trading cluster was an important reason why the lender placed some its the credit traders there, Krings said in the interview. The city has a good pool of graduates thanks to its high-quality universities and it’s also “an attractive place” to live for more experienced staff, he said.