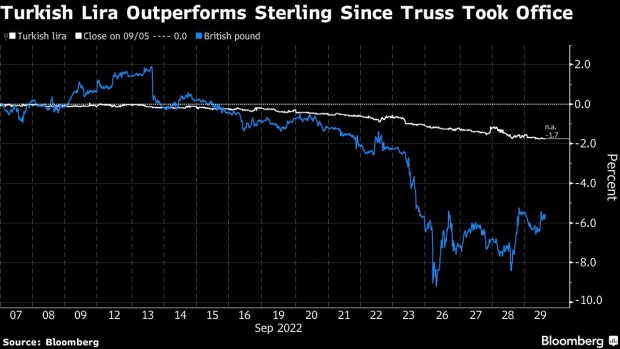 (Bloomberg) -- Turkish President Recep Tayyip Erdogan has overseen a 50% drop in the lira in the past year but that didn’t stop him from weighing in on the crash in the pound.

“The pound has blown up,” Erdogan declared at a televised event in Ankara.

UK Prime Minister Liz Truss has already faced criticism from the International Monetary Fund, Moody’s Investors Service and a host of international economists this week after her program of massive unfunded tax cuts spooked investors. That pushed the currency to a record low against the dollar, and left the fall over the past 12 months at about 19%.

Truss prides herself on dismissing the advice of so called orthodox economists but she might still balk at taking lessons from Erdogan. The Turkish president argues that lower interest rates can help fight inflation and has seen prices in his country leap by 80% over the past year.

“They were bragging about the pound on how valuable they are against this and that,” Erdogan said. “But we got the news today that they blew up.”

The lira extended its own slide on Thursday after Erdogan called for interest rates in the single digits by year-end, from 12% currently, claiming that this will help slow down inflation. That deepened woes about the government’s approach to monetary policy at a time when global markets are reeling.

But the Turkish currency has still outperformed the pound since Truss took office less than a month ago.