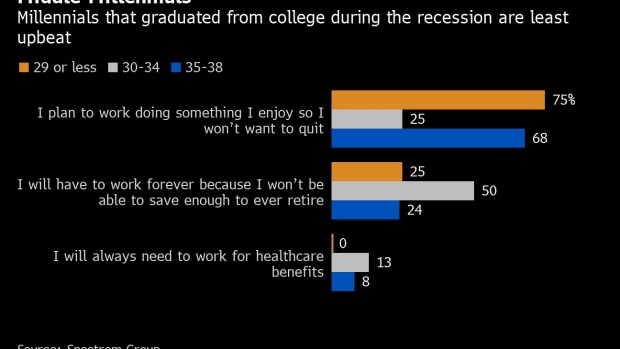 (Bloomberg) -- Half of high-income millennials ages 30 to 34 fear they’ll have to work forever because they won’t be able to save enough to retire.

That’s one take-away from a recent study that focused on high-income millennials, those with a minimum annual income of $100,000 for single people or $150,000 for married or partnered millennials.

The survey was conducted by the Spectrem Group, a wealth advisory company, and offers insight for the demographic that came of age during America’s worst economic crisis since the Great Depression.

In particular, millennials that are now 30-34 years old -- meaning that they likely graduated from college in the depths of the downturn, when hiring in many industries had dried up -- are the most cognizant of or concerned about finances.

That “middle” cohort, scarred by memories of a dismal employment market, are also far more willing to work at a job that they might not like than their younger or older peers.

High-income millennials under 29, who graduated from college when the U.S. economy had started to recover, are more optimistic, the survey found: they’re more willing to hold out for a job they enjoy, and less worried about having to work forever.

To contact the editors responsible for this story: Alex Tanzi at atanzi@bloomberg.net, Ros Krasny