There have been any number of IPO blowups in this year’s brutal equity rout but few as spectacular as Beyond Meat Inc.

The faux-meat purveyor tumbled as much as 10 per cent on Tuesday after enlisting Kim Kardashian to help spark a turnaround in its performance. The shares rebounded a bit on Wednesday, but the stock is still down 64 per cent for the year and 90 per cent from the US$234 peak it reached in the dizzying, go-go days that followed its initial public offering in 2019.

At the time of the offering, the stock’s first-day surge was the biggest since the 2008 financial crisis among US listings that raised US$200 million or more, with Beyond Meat Chief Executive Officer Ethan Brown being criticized by some on whether the IPO was priced too cheap.

Today, that sounds like a good problem to have. Shares currently are trading below the IPO price of US$25. The pact with Kardashian comes less than two weeks after shares dipped below the key level for the very first time on first-quarter revenue that missed Wall Street’s expectations.

“When you have a year like 2021, when sales growth for alternative meat products slowed substantially, there was a bit of a reaction that the potential for plant-based alternatives was overblown,” Bloomberg Intelligence analyst Jennifer Bartashus said in an interview. “There has been a challenging backdrop of supply chain issues, input cost inflation, labor costs rising and a flood of new competitors on the market.” 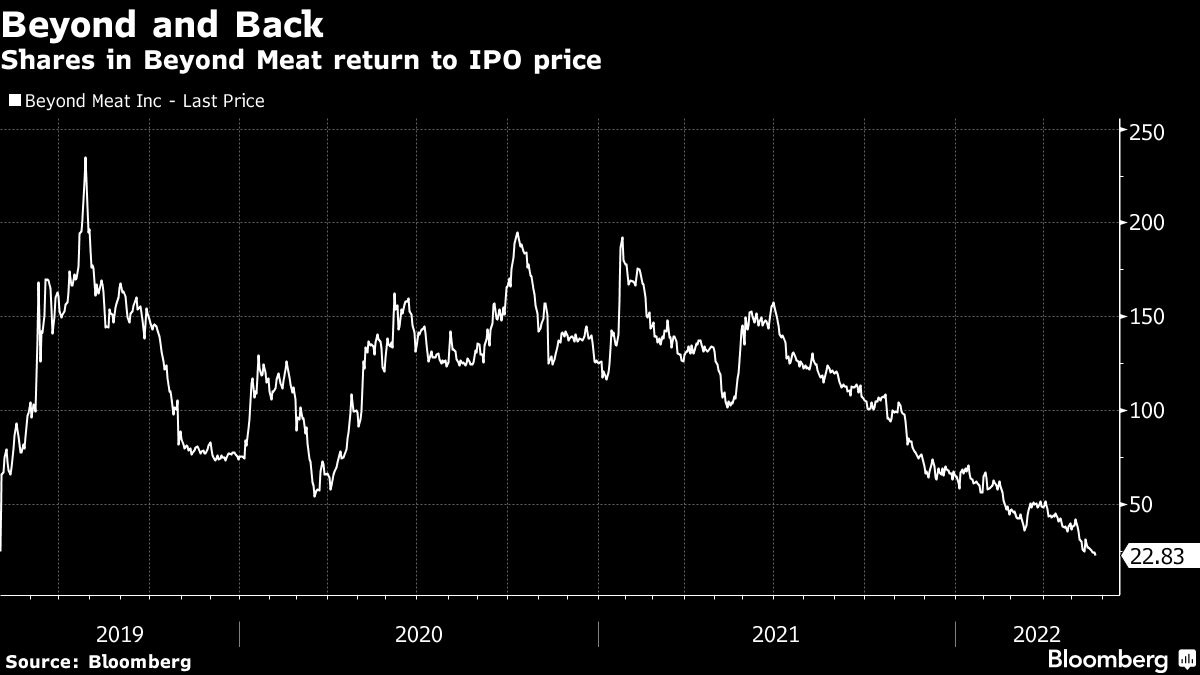 As the stock peaked in July of 2019, holders including Brown, Chief Financial Officer Mark Nelson and Chief Growth Officer Charles Muth sold about US$600 million of stock in a secondary offering at US$160 per share, more than triple the size of the company’s IPO. Selling restrictions linked to the IPO were waved to allow for the deal to occur just a few months after the listing. The company only sold 250,000 shares in the secondary offering, meaning it largely missed out on the financing opportunity at the higher valuation.

Beyond Meat might represent one of the greatest falls from grace for the high-flying IPOs minted during the bull market of recent years, but it isn’t alone. Poshmark Inc. popped by 142 per cent in its debut session and is now trading at one-quarter of its January 2021 IPO price. Snap Inc. surged by 44 per cent on its first day in 2017, pushing the stock above its current levels five years later due to a new profit warning from the firm. Other erased pops, like those in Beyond Meat peer Oatly Group AB -- have recently reminded investors how fleeting early price moves can be.