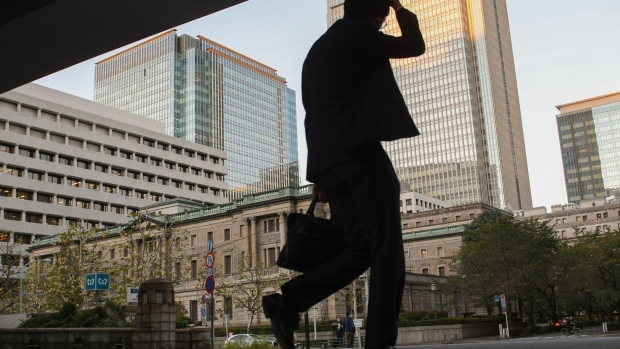 A pedestrian in front of the Bank of Japan (BOJ) headquarters at dusk in Tokyo, Japan, on Wednesday, Oct. 26, 2022. Bank of Japan Governor Haruhiko Kuroda appears as determined as ever to see out his inflation mission without buckling to market or political pressure. , Bloomberg

(Bloomberg) -- Even one of the strongest easing advocates on the Bank of Japan’s board said that a shift in Japan’s long-held deflationary price norms is beginning to materialize, although he didn’t hint at any policy change soon.

“We need a shift in inflationary norms, and green shoots are finally beginning to emerge toward it,” board member Asahi Noguchi told reporters Thursday in Akita, northern Japan. “I don’t expect any abrupt policy shift with the current data, but it could of course come earlier than expected depending on what additional data will show.”

Noguchi’s remarks suggest it’s getting harder even for cautious board members not to recognize the strength of price gains. Japan’s latest inflation measure has already accelerated to a 40-year high with more gains expected in the coming months, fanning continued market speculations over policy adjustments from the central bank.

Still, Governor Haruhiko Kuroda has signaled there will be no pivot toward tightening before he steps down in April. Noguchi also suggested a similar view by saying positive results from next year’s spring wage negotiations would simply bring favorable economic conditions closer, not necessarily completing the BOJ’s task of achieving a virtuous cycle.

Noguchi said Japan’s wage growth needs to be 3% to achieve the BOJ’s goal of sustainable 2% inflation. Rengo, Japan’s largest umbrella organization of labor unions, finalized its guideline for the negotiation Thursday, saying it would seek a total wage increase of around 5%.

“A recent increase in the number of businesses passing costs onto consumers may reflect a change in corporate behavior that used to assume that prices will not rise,” Noguchi said in a speech given to business leaders in Akita this morning.

Noguchi’s comments followed the BOJ’s analysis Wednesday that even those companies and industries that used to be cautious about adjusting their price tags are doing so as many businesses face rising cost pressures.

“A change in policy won’t be odd at all, if it becomes certain that the inflationary trend will remain above 2%,” Noguchi said.