Ad spend is the first thing that goes as the economy slows down: Gerber Kawasaki’s Hatem Dhiab

Growth is sputtering across the technology world, and even usually invincible companies like Apple Inc. and Amazon.com Inc. can’t escape the slowdown.

With many of the biggest tech giants poised to report earnings in the next two weeks, investors are bracing for mostly bad news. Amazon is expected to grow at its slowest rate in decades. Chipmakers are lurching from boom times to a potential glut. And gig-economy companies such as Uber Technologies Inc. and DoorDash Inc. could be victims of consumer budget-cutting during a shaky economy.

Then there’s the pullback in online advertising -- a shift that already ravaged sales of Snap Inc. and Twitter Inc. last week and is poised to weigh on results from Facebook parent Meta Platforms Inc. on Wednesday.

The question for investors is how much of the slowdown is already reflected in stock prices. The tech-heavy Nasdaq 100 Index is down 24per cent this year, Amazon is down a bit more than that and Meta has lost half its value.

Here is how tech industries are expected to fare as corporate results trickle in over the coming days:

Research firm Magna estimates that the US digital ad market increased just 11per cent in the second quarter, a steep deceleration from 58per cent in the same period a year earlier. Growth will be especially anemic for social media ads, which have been hurt by Apple privacy changes that make it harder to target customers. 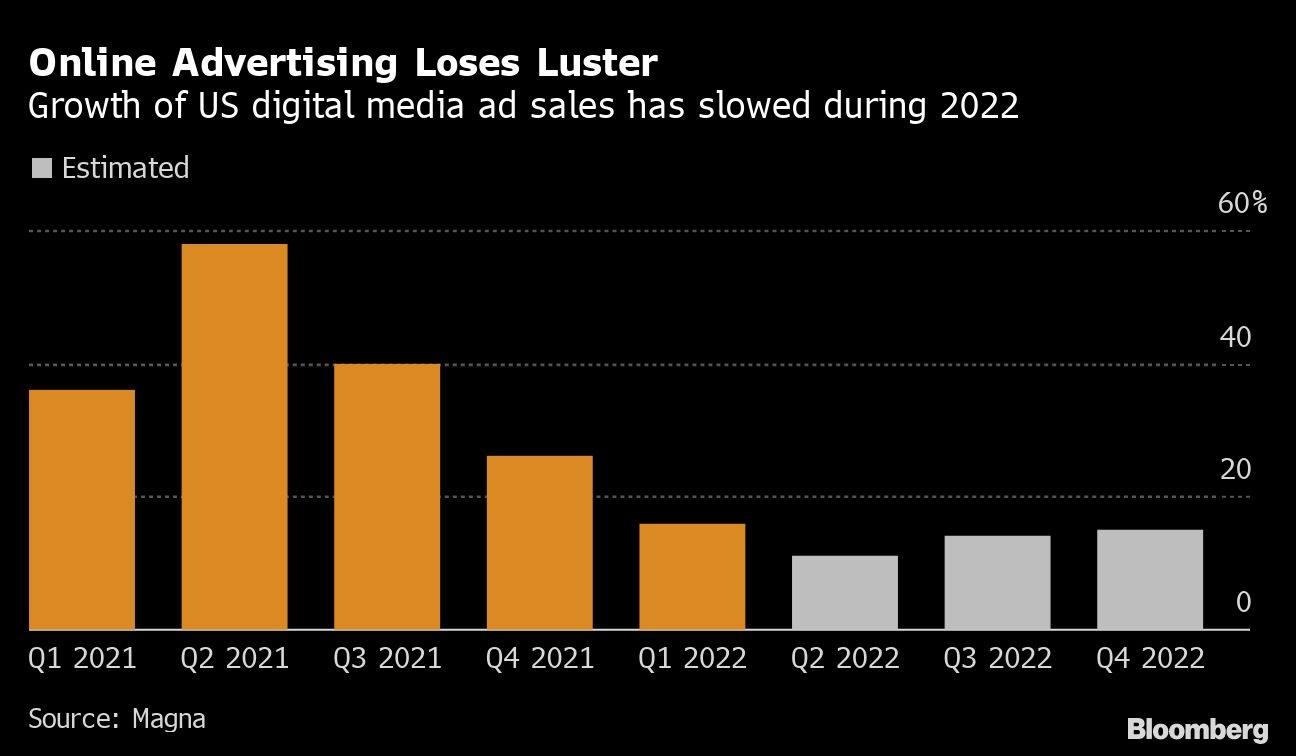 That’s left an increasingly crowded field of tech companies vying for a piece of the pie. Google and Facebook, which renamed itself Meta last year, were long the kings of online advertising. But Amazon and TikTok are now making inroads.

Meta is poised to report its first period of zero sales growth since the company’s initial public offering a decade ago, along with a 33per cent decrease in net income. Alphabet Inc., Google’s parent company, is expected to post its slowest sales increase since the start of the pandemic in 2020.

Facebook and Google “seem to be so much on the back foot right now,” said Eric Franchi, a general partner at AperiamVentures, a venture capital firm that invests in marketing and media startups. “Things have shifted really fast.”

There are still some bright spots in ad spending, said Sean Corcoran, US CEO of media agency Mediahub Worldwide. Some clients in sectors such as travel and entertainment are continuing to spend at a healthy clip, while others are in wait-and-see mode, he said.

“That’s kind of where people are at -- they don’t know what to expect,” Corcoran said. “They don’t want to make the big cut. They want to keep the engines burning.”

Amazon isn’t just facing a historic slowdown in sales growth -- it’s dealing with a hangover from its pandemic investments. When e-commerce spending surged after the Covid-19 outbreak, the company went into building mode, doubling its warehouse footprint to meet demand. Now that shoppers have gone back to physical stores, Amazon has too much capacity. So it’s subleasing space and reducing its hourly workforce through attrition.

In the meantime, profit has taken a hit. Analysts are predicting earnings of 14 cents per share in the second quarter, with total net income expected to decline 82per cent from a year earlier. Profitability is expected to rebound in the second half of the year as Amazon slims down.

If there’s a full-blown recession, Amazon could still fare better than rivals -- thanks to its reputation for low prices. During the global financial crisis in 2008, the company grew faster than the overall e-commerce industry.

For now, Amazon’s growth has slowed to a trickle. Revenue is projected to rise by 6per cent, the lowest in any quarter since 2001. And if you just look at Amazon’s online stores segment, the sales are expected to decline for a third straight quarter. The company’s cloud services division should continue to be a bright spot during the slump, helping bolster results.

The specter of an economic recession looms over ride-hailing and food-delivery apps like Uber, DoorDash and Lyft Inc., whose services may become more of a luxury as consumers’ budgets tighten. Already, shares of the companies have plunged this year, with the especially hard-hit Lyft losing more than two-thirds of its value.

DoorDash and Uber have benefited from a boom in takeout food orders during the pandemic, spurring an expansion into alcohol, convenience-store items and groceries. That area remains relatively strong. Delivery sales grew an estimated 23per cent at DoorDash last quarter from a year earlier and 31per cent at Uber. Still, order volumes are down from Covid-19 highs, and competition with peers like GrubHub and Instacart is intensifying. 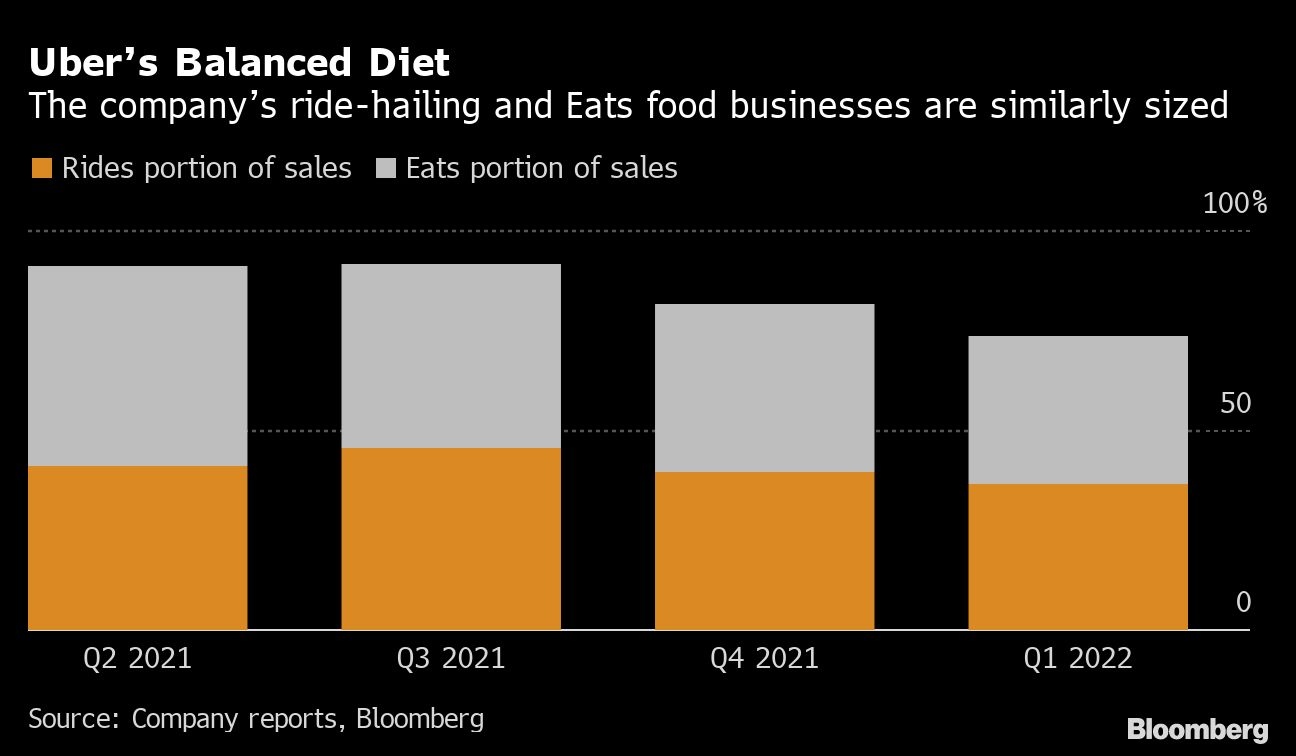 Unlike Uber, Lyft still gets almost all its revenue from ride hailing, which suffered greatly during pandemic lockdowns. Demand has now rebounded, but a persistent shortage of drivers has proven costly. For Lyft, plans to ramp up spending on driver bonuses and incentives is fueling concern among investors that profit will get squeezed.

Travel executives proclaimed for months that the summer season would be their best yet. After all, Covid restrictions have been lifted in much of the world, and travelers have two years of pent-up demand.

But summer got off to a rocky start, with labor strikes and staffing shortages plaguing airports in Europe and several US airlines cutting flight capacity. Add inflation and economic uncertainty to that, and the industry’s recovery could weaken.

A ferociously strong dollar also is weighing on earnings, especially for companies like Booking Holdings Inc. and Airbnb Inc. Close to 87per cent of Booking’s revenue comes from foreign markets, with many sales denominated in pounds and euros, both of which have weakened this year. About half of Airbnb’s revenue last year came from overseas.

Such companies are still growing much faster than most tech giants right now. But some analysts are pulling back on their projections. Truist Securities’s Naved Khan sees third-quarter revenue of US$2.71 billion for Airbnb, down from his previous estimate of US$2.83 billion. That period is typically the company’s biggest sales season of the year.

Apple is expected to post its slowest quarterly sales growth since the early days of the pandemic. It already warned that supply-chain snags would reduce sales by much as US$8 billion in the period, and now investors are worried about ebbing consumer demand as well. 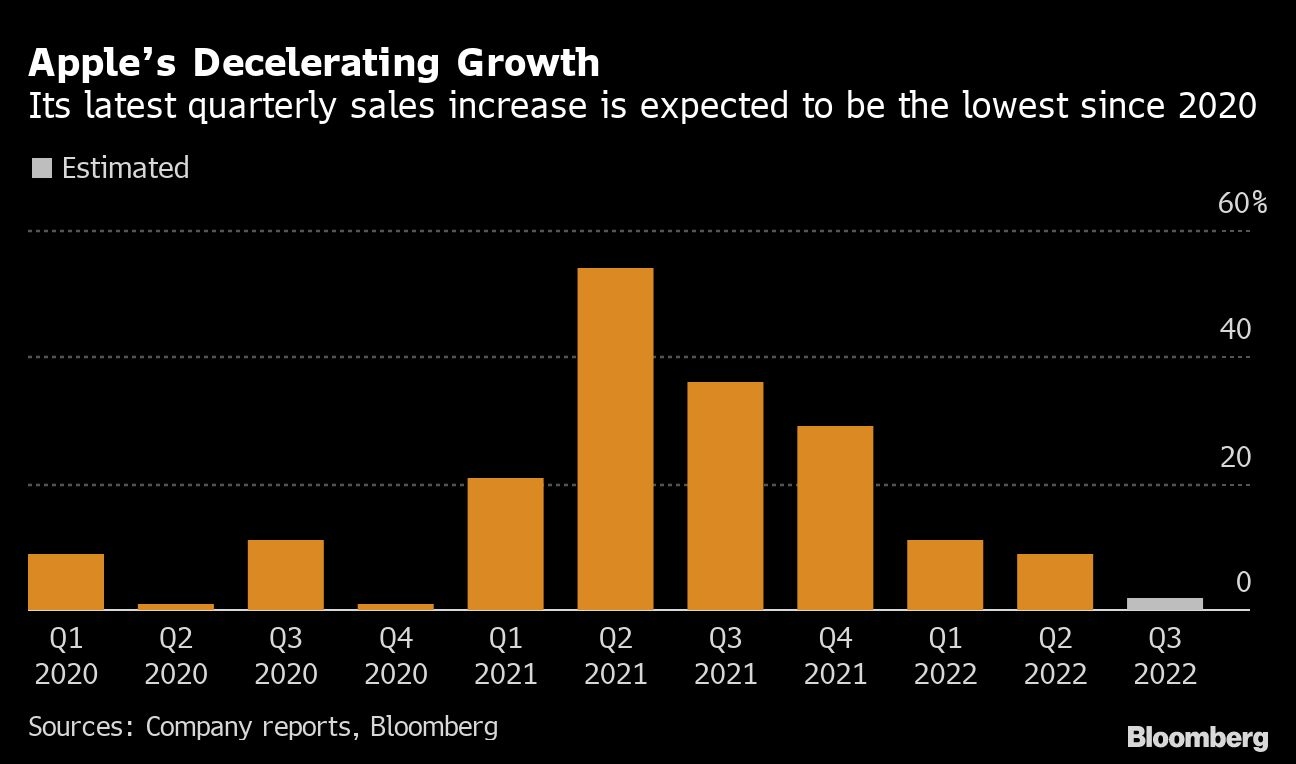 In any case, Apple’s fiscal third quarter is a tough comparison with the year-earlier period, when sales jumped 36per cent -- helped by customers stocking up on equipment to outfit their home offices during the pandemic.

If there’s any growth in Apple’s business, it will be in online services. Analysts expect a record for the June quarter in that category, with sales reaching nearly US$20 billion.

Surging sales of chips during the pandemic brought shortages and sent the industry scrambling to add capacity. But investors have become increasingly concerned that demand may have peaked. That’s reflected in the benchmark Philadelphia Stock Exchange Semiconductor Index, which is down 28per cent this year.

Texas Instruments Inc. will give its earnings report on Tuesday, providing vital clues about the state of the industry. It has the broadest product range among chipmakers and the biggest customer list. That makes it a bellwether for sales of everything from industrial machinery to space hardware to consumer electronics. Analysts expect Texas Instruments to report a 1per cent decrease in sales, compared with a 41per cent gain in the year-earlier quarter. 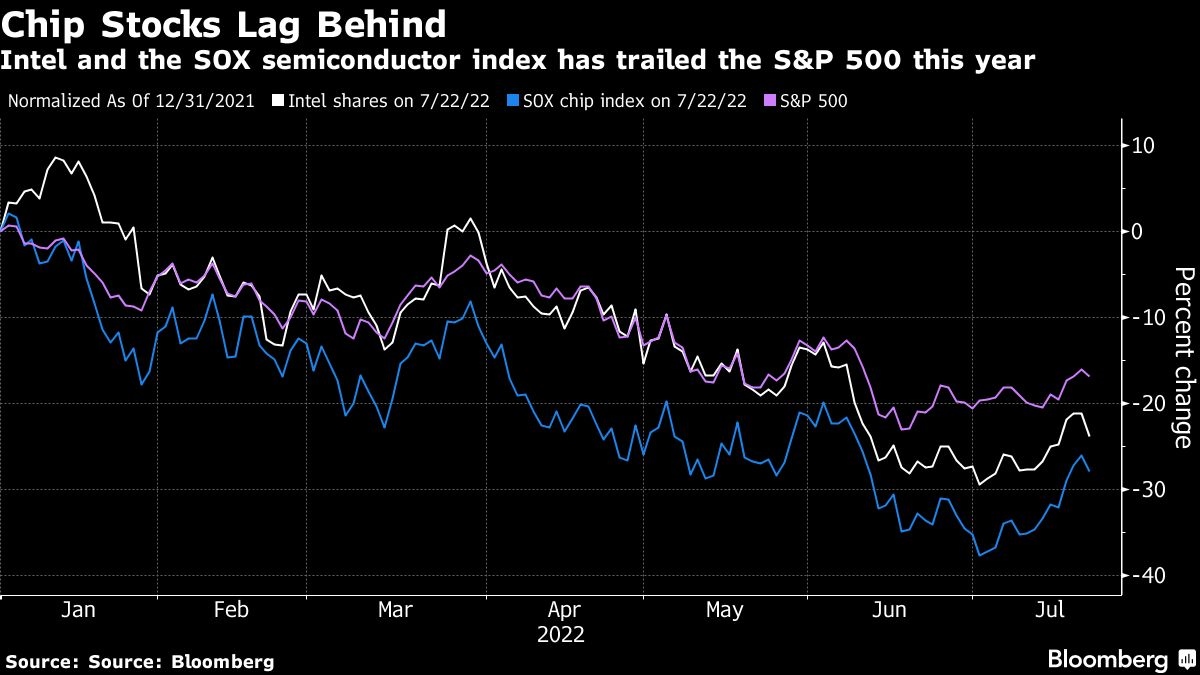 Intel Corp., the biggest US chipmaker, delivers its results on Thursday, alongside Apple and Amazon. Estimates indicate that revenue fell 3per cent in the second quarter, pushed down by lower demand for laptop chips. In June, Chief Financial Officer Dave Zinsner said the economy had gotten weaker and that it was going to affect Intel’s financial performance. 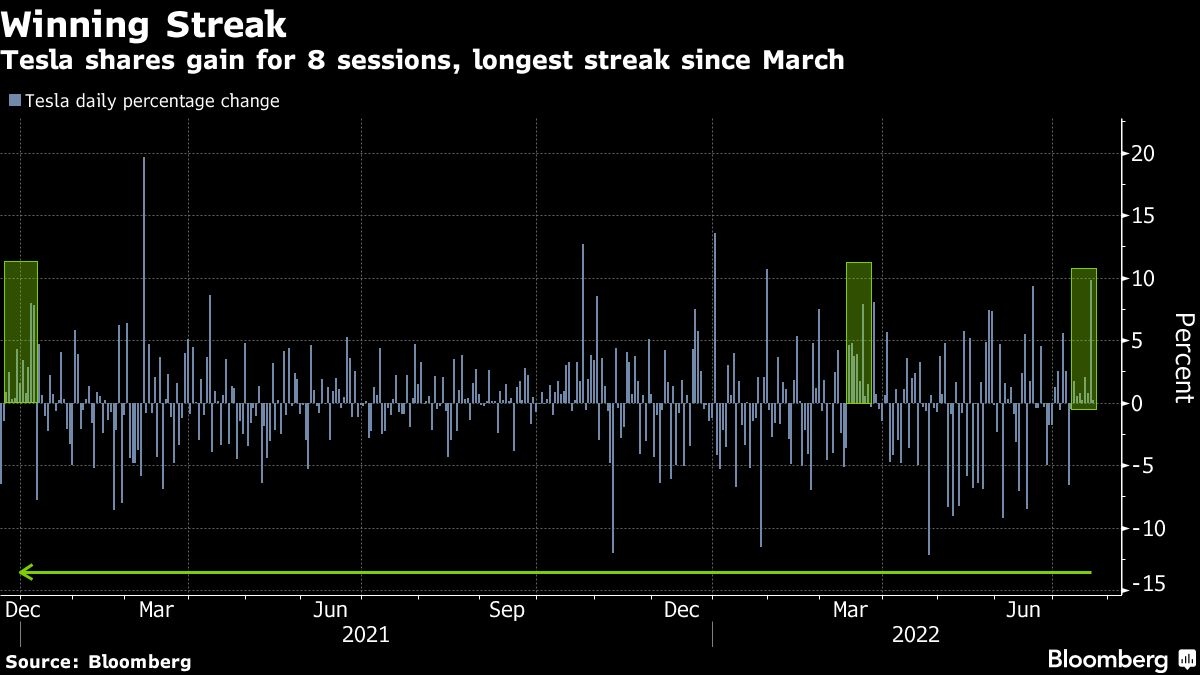 Tesla Inc. shares have risen for eight straight sessions, their longest streak since March, and they’re higher again in premarket trading Monday. A ninth gain would be the longest run since January 2021. The rally has added has added more than US$121 billion to the electric-vehicle maker’s market capitalization. The shares have risen 21per cent in July, outperforming both the S&P 500 Index’s 4.7per cent rise and the tech-heavy Nasdaq 100’s 7.8per cent gain this month.