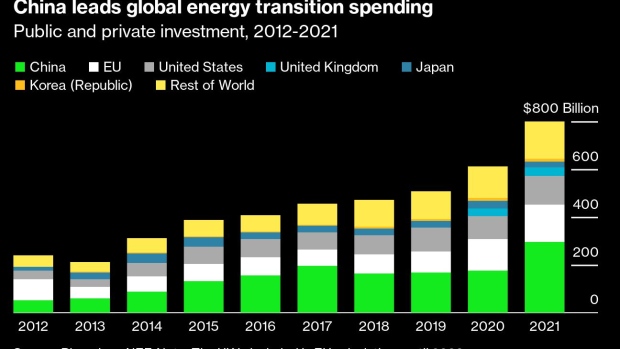 Wind turbines at the San Gorgonio Pass wind farm in Whitewater, California, U.S., on Thursday, June 3, 2021. Communities from California to New England are at risk of power shortages this summer, with heat expected to strain electric grids that serve more than 40% of the U.S. population. Photographer: Bing Guan/Bloomberg , Bloomberg

(Bloomberg) -- The historic US climate deal that has now passed both chambers of Congress is being touted as one of the most ambitious decarbonization commitments made by any government to date. Is it?

Many countries have passed climate regulations and invested in green infrastructure, but the scale of the Inflation Reduction Act has few parallels. The bill devotes $374 billion to climate and energy measures over the next decade, with a focus on subsidies that make it easier and cheaper to live more sustainably.

When you combine public and private investments aimed at accelerating the energy transition, China is by far and away the biggest spender, according to data compiled by energy research group Bloomberg NEF. Neither the IRA nor Europe’s Green Deal appears likely to change that. China spent $297.5 billion last year on the energy transition, while EU member states devoted $155.7 billion and the US $119.7 billion, using the BNEF methodology.

When comparing international efforts, it can be tricky to untangle where government expenditures end and private ventures begin, and analysts frequently lean towards more qualitative analysis. One major distinction between the US plan and models pursued by other major emitters like the European Union and China is that the American plan doesn’t rely on carbon pricing.

“Compared to a policy mix of regulations, targets and investments as used by the EU and China, the US is taking a different approach to climate by opting for a massive spending bill,” said Belinda Schäpe, a climate diplomacy researcher on EU-China relations with E3G.

Carbon pricing has long been championed by economists as a first step toward decarbonization and has been embraced by dozens of nations, although debates about its effectiveness rage. A growing group of political scientists argues that a better approach is to make clean energy and greener technologies more accessible, much like the approach now being taken by the US.

The EU’s Green Deal, approved in 2020, aims to retool how the continent’s economy works by redesigning everything from farming to how cities are built. The bloc plans to spend 30% of its €2 trillion budget for 2021-2027, or about €600 billion ($612 billion), to fight climate change, and that doesn’t include individual member state investments and subsidies, according to the research firm Rhodium Group.

The IRA includes funding for a new federal green bank. That $27 billion is “dwarfed” by Germany’s state-owned development bank KfW, which has assets of about $500 billion and is a “critical source of capital” for green projects worldwide, notes Kelly Sims Gallagher, director of the Climate Policy Lab at Tufts University’s Fletcher School.

“While the Inflation Reduction Act will mobilize unprecedented amounts of investment into clean energy in the United States for the next decade, China and the EU are spending as much or more,” Gallagher said.

In China, much of that money is being directed at a world-leading expansion of wind and solar, which was supercharged when President Xi Jinping said in 2020 that the nation is aiming to be carbon neutral by 2060. The buildout of renewable generation in China has been so successful that it now threatens farmland and authorities are seeking to balance new solar installations with food security.

China is set to install a record 156 gigawatts of wind turbines and solar panels this year, according to China Renewable Energy Engineering Institute, a think tank that supports the country’s National Energy Administration. By comparison, under the Inflation Reduction Act, additions to US wind capacity could increase from 15 to 39 gigawatts per year in 2025-2026, and from 10 to 49 gigawatts of utility-scale solar, with solar growth rates then accelerating, according to a preliminary analysis by researchers at Princeton University.

But perhaps the better question to ask about state-backed climate efforts is whether they will sufficiently reduce greenhouse gas emissions. The International Energy Agency has charted a pathway for the world’s energy systems to become net-zero by 2050, limiting the worst impacts of climate change. By that metric, most major emitters are spending significantly less than they need to be.

To bring worldwide energy-related carbon dioxide emissions to net zero by 2050, annual capital investment needs to reach almost $5 trillion by 2030 and $4.5 trillion by 2050, according to an IEA assessment. The one thing public climate spending plans in the US, China and the EU all have in common is that the investments aren’t enough, said E3G’s Schäpe.

“To succeed in bringing about the global transition needed, the US, China, and the EU, as the largest emitters, all need to significantly scale up investments — at home and abroad,” she said.