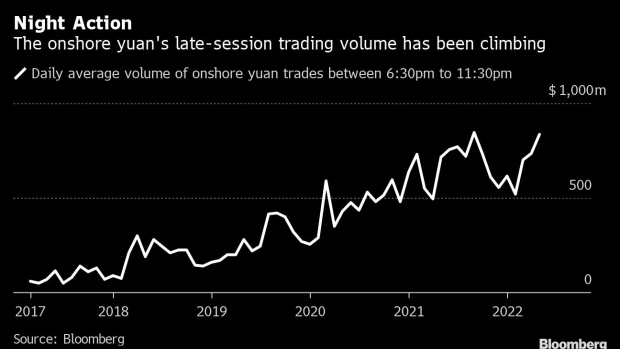 (Bloomberg) -- Yuan trading at night is gaining momentum in China, supporting Beijing’s plans to extend market hours and further its aims to internationalize usage of the currency.

Onshore yuan transactions between 6:30 p.m. and 11:30 p.m. local time have reached a daily average of $834 million in May, up from $671 million over the course of last year. That’s almost ten times what was seen back in 2017, when Bloomberg started compiling the data.

The growth comes as the People’s Bank of China pledged to further open up local markets, including a longer night session for currency trading, after the International Monetary Fund lifted the yuan’s weighting in its elite reserve currency basket. Some of the growth this year though may be driven by strict Covid lockdowns in Shanghai, as home access to trading systems allowed more deals to be executed outside normal business hours.

“Extending trading hours is more intended for yuan internationalization as it’s an important factor for it to become a global currency,” said Ken Cheung, chief Asian currency strategist at Mizuho Bank Ltd. “In the near term, it will also counter depreciation-oriented sentiment toward the offshore yuan.”

The yuan is Asia’s worst-performing currency this month with a loss of 2.3%, as extensive Covid control measures wreaked havoc on the Chinese economy, depressing industrial output and consumer spending to the worst levels since the pandemic began. It plunged 4% in April against the dollar.

The yuan has become more active in the evening since early 2016, when the PBOC extended trading for the currency onshore by seven hours to 11:30 p.m. But the central bank continues to use the 4:30 p.m. rate as its official close, saying liquidity outside the regular Asia hours can be poor and can heighten the risk of unrepresentative exchange rates or manipulation. The morning session starts at 9:30 a.m.

The daily average for night-time trading of onshore yuan hit a peak of $847 million last September. The total volume of late-session transactions reached a record $163 billion in 2021, jumping 47% from the previous year.

For years, China has been trying to increase the yuan’s global usage, setting up clearing banks around the world, issuing bonds overseas and launching currency swap lines with foreign monetary authorities. European cities like London and Frankfurt have meanwhile been vying to become the prime location for yuan trading outside of Asia.