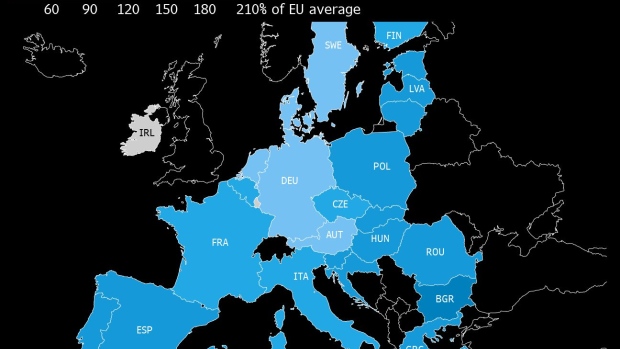 The Balkan nation of 6.5 million has already lost more than a quarter of its population since it peaked at the end of communist rule three decades ago, according to early estimates from a 2021 census. A United Nations report from 2019 said it will lose another 23% by 2050, making it one of the world’s fastest-shrinking nations.

For policy makers grappling with the fallout and demographers crunching the numbers, the dizzying spiral is driven by a double-whammy effect: about half of the drop since 2011 is down to negative natural decrease – more deaths than births – and the rest to Bulgarians of child-bearing age leaving the country.

“Bulgaria exports fertility,” Sergey Tsvetarsky, the head of the National Statistical Institute, said this month in response to a query. “At the same time, older people remain in the country. Whole regions are being depopulated.”

The acute contraction of Bulgaria’s human capital has consequences that go beyond the fiscal realm, where the demographic shift squeezes pension contributions and the tax base. The government in Sofia under its new Harvard-educated prime minister, Kiril Petkov, 41, will have to think about transforming the country’s economy and assisting regions that are physically emptying out.

In short, policy makers have no choice but to consider how future programs will work if there are far fewer Bulgarians sooner than later.

Every new piece of legislation should include a demographic-impact assessment, Korneliya Ninova, Bulgaria’s deputy prime minister in charge of the economy and industry, told lawmakers this month after the data was published. It’s useless to put forward plans “if there are no people,” she said.

How the Balkan nation deals with the crisis could become a blueprint for other European states reeling from population loss. Lithuania, a Baltic nation of 2.8 million, was also at the bottom of the UN report.

The Covid-19 pandemic also had a brutal impact on Bulgaria, whose vaccination rate is the EU’s lowest at 28%. The crisis contributed to the highest number of deaths the country has recorded in more than a century -- almost 150,000 overall. That’s some 37% higher than 2019 and close to the level recorded in 1918, the year World War I ended and the Spanish flu pandemic swept through the population.

For wealthier nations, demographic erosion is compensated by immigration. But Bulgaria’s low wages have blunted that effect, according to Adrian Nikolov, an economist at the Sofia-based Institute for Market Economics.

“If a Ukrainian manages to get access to the EU labor market, why would he go to Bulgaria, rather than Germany, France -- or even Romania?” Nikolov said in an interview.

The impact is most acute in places like Vidin, a province along the Danube river in Bulgaria’s northwest, wedged between Serbia and Romania. Home to castle ruins that once defended Europe’s southeastern frontier from Ottoman invasion, the region’s capital has lost a quarter of its population in only a decade.

Once home to a range of industries, from chemicals and car tires to clothes and cigarettes, Vidin now features empty playgrounds by the river, with dozens of nearby villages deserted.

Vidin’s per-capita output is 32% of the EU average, much lower than the 55% average for Bulgaria as a whole -- already the bloc’s poorest.

“The demographic catastrophe is a projection of all the crises of our transition -- poverty, uncertainty, the problems of health care and the moral crisis,” Bulgarian President Rumen Radev told lawmakers Jan. 19. “Our nation is living the transition as a trauma comparable to a state of war.”