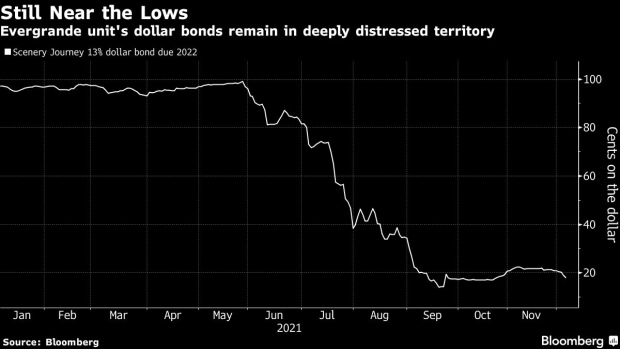 (Bloomberg) -- Some China Evergrande Group bondholders had yet to receive overdue coupon payments by the end of a month-long grace period, signaling a possible default by the developer as it prepares for one of China’s largest-ever debt restructurings.

Two holders of the dollar notes sold by Evergrande’s Scenery Journey Ltd. unit said they hadn’t received the payments as of 12:30 a.m. New York time Tuesday. The coupons -- $41.9 million for a note maturing in 2022 and $40.6 million for a bond due the following year -- were initially due Nov. 6, with a 30-day grace period. The holders spoke on condition of anonymity to discuss private investments.

Evergrande didn’t immediately respond to a request for comment.

The developer said in a brief exchange filing on Friday that it plans to “actively engage” with offshore creditors on a restructuring plan, without specifying whether it will continue making interest payments. The company is planning to include all its offshore public bonds and private debt obligations in a restructuring that may rank among the nation’s biggest ever, people familiar with the matter said Monday.

Evergrande has some $19.2 billion in outstanding offshore public bonds and $8.4 billion in local notes, Bloomberg-compiled data show. Its total liabilities exceeded $300 billion as of June.

The developer sits at the center of a broader crisis in Chinese property debt that was sparked by a government clampdown on excessive borrowing and real estate speculation. Chinese borrowers have defaulted on a record $10.2 billion of offshore bonds in 2021, with real estate firms making up 36% of that total, according to data compiled by Bloomberg. That’s pushed yields on an index of Chinese junk bonds, many of which come from property firms, to near record highs above 22%.

The turmoil has prompted Xi Jinping’s government to take a series of steps to contain the fallout on Asia’s largest economy. The latest support measures came on Monday, with China’s central bank releasing about 1.2 trillion yuan ($188 billion) of liquidity into the financial system via a cut in the reserve requirement ratio for most banks. The government also added to signs it will ease real estate curbs, pledging to support the housing market to better meet “reasonable” needs.

Evergrande has so far managed to avert defaulting on any publicly traded dollar bonds, making several last-minute payments in recent weeks. But much of that debt trades below 20 cents on the dollar, reflecting the high likelihood of default. Evergrande shares hit a record low Monday.

The coming days bring more deadlines for distressed borrowers in the sector. Kaisa Group Holdings Ltd., China’s third-largest issuer of dollar bonds among property firms and first-ever developer to default on dollar bonds in 2015, has a $400 million note maturing on Tuesday. A group of its noteholders sent the company a formal forbearance proposal on Monday evening in Hong Kong that might allow the company to avoid default, separate people familiar with the matter said.

(Updates with no payments as of 12:30 a.m. New York time in second paragraph, outstanding debt in fifth paragraph.)