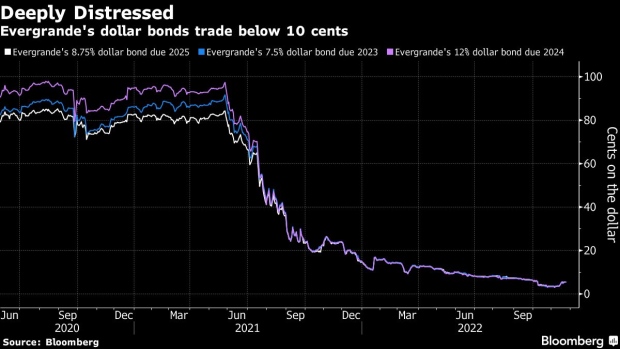 (Bloomberg) -- China Evergrande Group has told offshore creditors it plans to present a restructuring proposal as soon as the first week of December to meet a self-imposed deadline, according to people familiar with the matter.

The proposal may include swapping debt for shares in Evergrande’s Hong Kong-listed auto and property management units, one of the people said, asking not to be identified discussing a private matter. Evergrande’s mainland assets will be mostly out of reach for its offshore investors, the person added.

Evergrande’s working team overseen by the local Guangdong government also recently reported a request from one ad-hoc creditor committee to regulators, two people said, asking not to be named because the matter is private. The group of creditors asked Chairman Hui Ka Yan to inject at least $2 billion of his personal wealth into Evergrande as a condition for agreeing with any proposals from the company, the people said.

The moves dovetail with an acceleration of asset disposals by state-backed creditors on the mainland, in a sign that Beijing may be close to deciding the fate of the world’s most indebted developer. Financial regulators recently advised some onshore creditor banks in informal talks to sell assets and collateral they held in real estate companies, including Evergrande, before the year-end instead of waiting for a holistic restructuring — a reversal of previous instructions, the people said.

The deliberations are still ongoing and could change, said the people. Evergrande and the Guangdong government didn’t immediately respond to requests for comment.

Evergrande’s fate has broader implications for China’s $58 trillion financial system, as the country’s biggest-ever potential restructuring could send ripples across banks, trusts and millions of home owners. The sheer size has left investors worried that any collapse may spark financial contagion and curb growth in the world’s second-largest economy, which depends on housing for about a quarter of gross domestic product.

Evergrande previously told investors it would submit a restructuring proposal by the end of this year, after delaying its plan once already. With more than $270 billion of liabilities, the company is at the center of a property crisis that’s triggered a wave of defaults and caused home construction halts across the country. It’s also facing a winding-up lawsuit in Hong Kong.

President Xi Jinping’s government is trying to strike a balance between curbing debt at leveraged developers and limiting the economic fallout, as home sales tumble. Property sits at the heart of his “common prosperity” campaign, as he seeks to drive population growth and narrow the wealth gap.