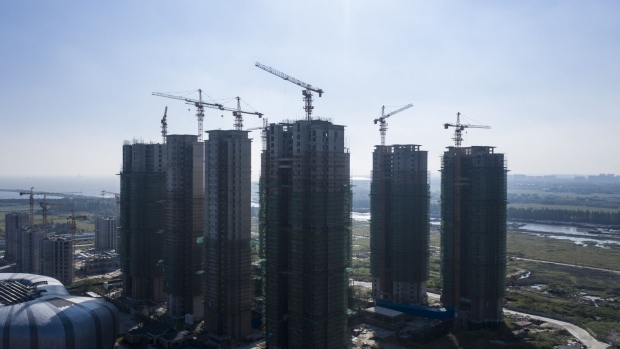 (Bloomberg) -- China Evergrande Group was labeled a defaulter by S&P Global Ratings, the second credit-risk assessor to do so.

S&P Global cut Evergrande to “selective default” over its failure to make coupon payments by the end of a grace period earlier this month, a move that may trigger cross defaults on the developer’s $19.2 billion of dollar debt. S&P Global also withdrew its ratings on the group at Evergrande’s request.

Fitch Ratings was the first to declare the property developer in default on Dec. 9. Long considered by many investors as too big to fail, Evergrande has become the largest casualty of Chinese President Xi Jinping’s campaign to tame the country’s overindebted conglomerates and overheated property market. Concern has since spread to higher-rated firms like Shimao Group Holdings Ltd. as liquidity stress intensifies.

Earlier this month, China’s central bank governor said Evergrande’ situation had to be dealt by the market, signaling that Beijing wouldn’t bail out the world’s most-indebted developer as it struggles with more than $300 billion in liabilities. Evergrande has said it plans to “actively engage” with offshore creditors on a restructuring plan. The company intends to include all its offshore public bonds and private debt obligations, people familiar with the matter separately said.

Evergrande bondholders including Marathon Asset Management have said they expect offshore creditors to be near the bottom of the queue for repayment. Evergrande is prioritizing payments to migrant workers and suppliers as regulators urge the cash-strapped developer to head off any risk of social unrest, according to people familiar with the matter.

Founder Hui Ka Yan has seen his wealth plunge by $17.2 billion this year as the group’s shares and bonds tumbled. Once Asia’s second-richest person with a $42 billion fortune, Hui is now worth $6.1 billion.