China Evergrande Group has officially been labeled a defaulter for the first time, the latest milestone in months-long financial drama that’s likely to culminate in a massive restructuring of the world’s most indebted developer.

Fitch Ratings cut Evergrande to “restricted default” over its failure to make two coupon payments by the end of a grace period on Monday, a move that may trigger cross defaults on the developer’s US$19.2 billion of dollar debt.

The downgrade came just minutes after Fitch applied the same default label to Kaisa Group Holdings Ltd., which failed to repay a US$400 million dollar bond that matured Tuesday. Together, the two companies account for about 15 per cent of outstanding dollar bonds sold by Chinese developers.

Long considered by many investors as too big to fail, Evergrande has now become the largest casualty of Chinese President Xi Jinping’s campaign to tame the country’s overindebted conglomerates and overheated property market. Before this week, Chinese borrowers had defaulted on US$10.2 billion of offshore bonds in 2021, with real estate firms making up 36 per cent of the total, according to data compiled by Bloomberg. 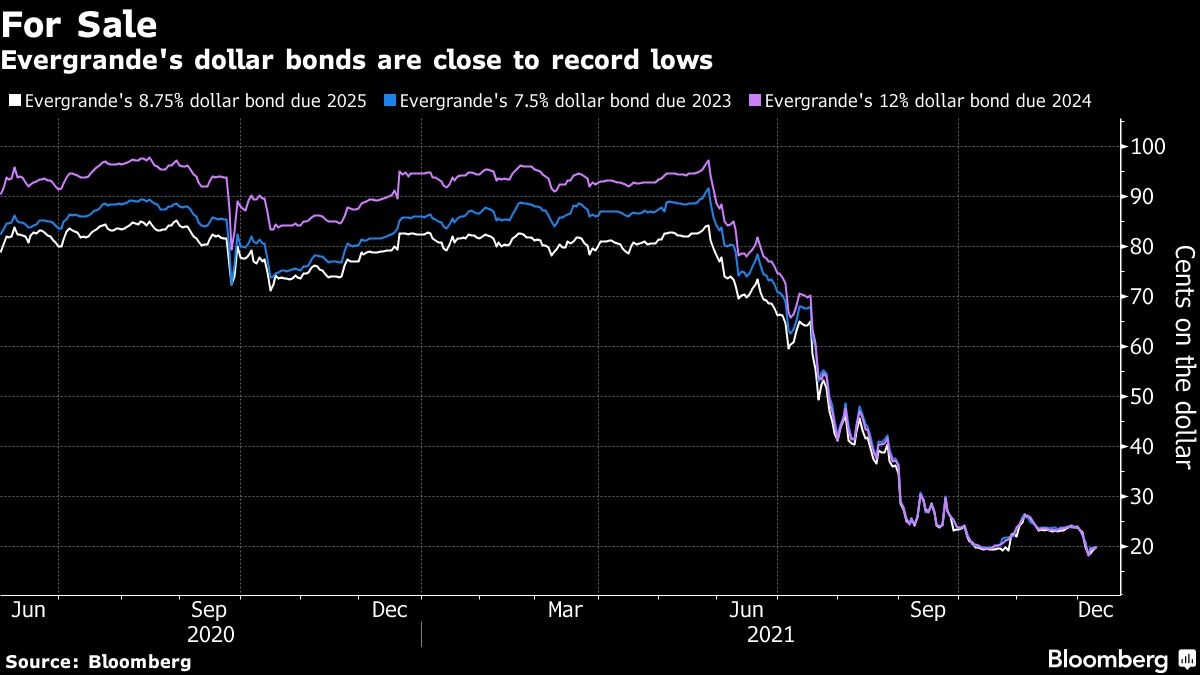 While Evergrande bondholders face deep haircuts in a restructuring that could take months or even years to resolve, there were few signs of financial contagion on Thursday. That’s partly because investors had been anticipating a default for months, but also thanks to a flurry of activity by China’s government to cushion the blow. 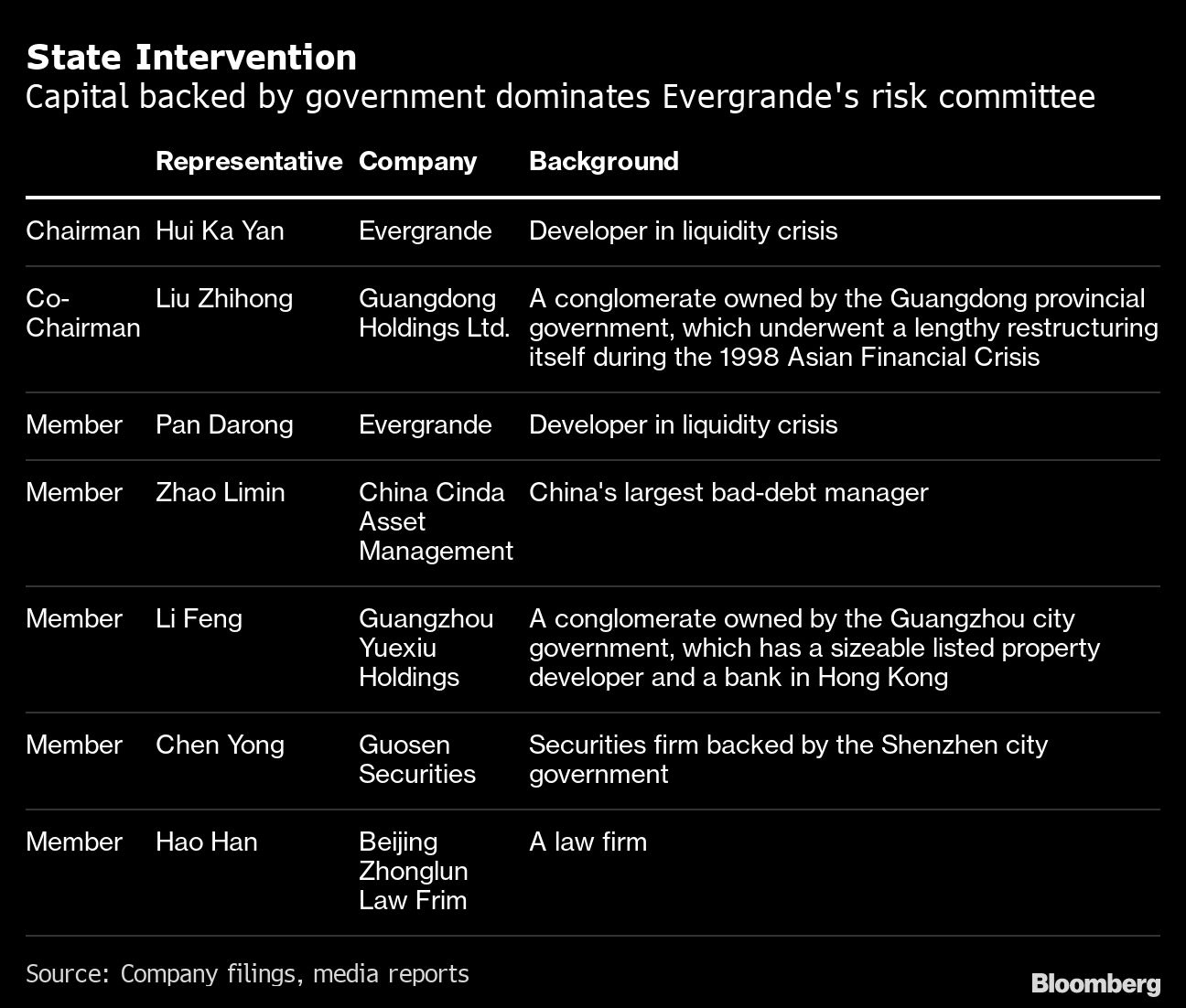 While that’s likely to help prevent nightmare scenarios of an uncontrolled Evergrande collapse, authorities have made it clear they have no intention of bailing out the property empire started by billionaire Hui Ka Yan 25 years ago. In a pre-recorded video message at a seminar in Hong Kong on Thursday, People’s Bank of China Governor Yi Gang described Evergrande’s situation as a market event that should be dealt with in a market-oriented way.

The Shenzhen-based developer, which disclosed more than US$300 billion of total liabilities as of June, said in a brief exchange filing on Dec. 3 that it will “actively engage” with offshore creditors on a restructuring plan. But with Chinese authorities now calling the shots, the developer has stayed largely silent on details of what its restructuring might look like.

Even Fitch has struggled to get information from Evergrande, noting on Thursday that the developer didn’t respond to its request for confirmation on this week’s coupon payments. “We are therefore assuming they were not paid,” Fitch analysts wrote in a statement. Bloomberg reported earlier this week that bondholders hadn’t received the money.

“The downgrade may not have an overt or immediate impact on the Chinese process, but may subtly increase pressure on the company (and regulators) to quickly reveal initial restructuring proposals,” said Brock Silvers, chief investment officer at Kaiyuan Capital in Hong Kong.

Evergrande bondholders including Marathon Asset Management have said they expect offshore creditors to be near the bottom of the queue for repayment. The Chinese government’s prime motivation is often maintaining social stability, which in this case means giving priority to homeowners, employees and individual investors in wealth management products.

PBOC Governor Yi said in the video message on Thursday that the “rights and interests of creditors and shareholders will be fully respected in accordance to their legal seniority.”

Some offshore bondholders see little use in pressing their case in Chinese courts, given the government’s heavy involvement in the overhaul. The fact that this is a cross-border restructuring with debt-issuing units listed in multiple jurisdictions creates another challenge for bondholders trying to get organized and show a united front.

Still, some offshore creditors are already consulting with financial and legal advisers. It may help that bondholders have included some of the world’s biggest investment firms, which China is unlikely to want to alienate. Ashmore Group, BlackRock Inc., FIL Ltd., UBS Group AG and Allianz SE have all reported holding Evergrande debt in recent months, Bloomberg-compiled data show.

David Qu, an economist at Bloomberg Economics, said authorities may follow the principle that guided the seizure of Baoshang Bank Co. in 2019: prioritizing social stability, with a “bail-in” of institutional investors to be used when needed. In Evergrande’s case, homebuyers are probably equivalent to Baoshang depositors, who were fully repaid, he wrote in a note.

He Jun, a researcher at independent strategic think tank Anbound Consulting, sees a potential road map in the restructuring of HNA Group Co. The conglomerate’s home province of Hainan formed a government-led working group in February 2020, effectively taking control of the company. About a year later, it entered a court-led restructuring.