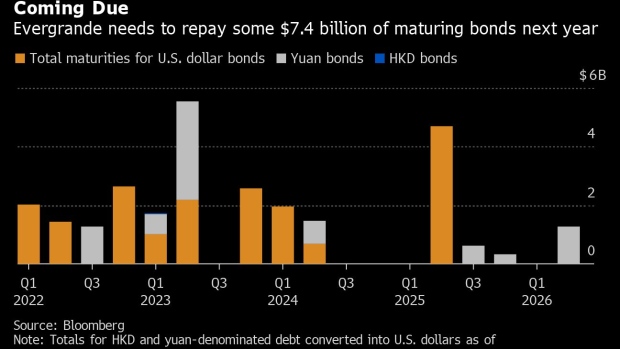 (Bloomberg) -- Time is running out for China Evergrande Group to avoid default.

The embattled real estate giant has until this weekend to pay an $83.5 million bond coupon, a situation made more pressing by the recent collapse of talks to sell a stake in a unit for $2.6 billion. Speculation about a default has been swirling for months, stoking credit-market contagion among other cash-strapped developers and eroding confidence in a Chinese real estate market that by some measures accounts for more than a quarter of the economy.

If Evergrande fails to pay before the grace period ends, the consequences could be severe. Ratings agencies would likely label it a default, and the delinquency may trigger cross defaults on at least some of the company’s $19.2 billion outstanding dollar bonds. The bond in question, an 8.25% note due March 2022, was indicated at 24.6 cents on the dollar Thursday, Bloomberg-compiled data show.

There’s some uncertainty over timing. While the 30-day grace period for payment of the interest expires on Saturday, it’s unclear from the bond’s prospectus which timezone is used to decide the deadline. The fact that it falls on a weekend may mean creditors wouldn’t be able to immediately declare an official default in the event the company doesn’t pay.

Even then, bondholders representing at least 25% of the notes’ outstanding principal would need to agree on such a step and inform the trustee, according to Daniel Fan, an analyst at Bloomberg Intelligence. Other creditors may then act to protect their interest using cross-default clauses, he said.

“A default would likely prompt an informal standstill and then creditors to negotiate with the developer if it does not pay,” Fan said.

In the absence of any filing over Evergrande’s plans regarding its recent missed coupon payments on dollar bonds, major credit risk assessors and investors without direct access to the firm or its advisors have little information to go on. Hong Kong-listed firms that miss payments on public debt can opt to issue filings to the local stock exchange. Evergrande did not respond to request for comment.

S&P Global Ratings and Fitch Ratings declined to comment on the specifics of Evergrande’s 2022 coupon. Moody’s Investors Service considers non-payment of a coupon after the grace period a default according to the terms of the bond prospectus, Kaven Tsang a corporate finance senior vice president at the firm said.

Evergrande had total cash, including restricted cash, of 162 billion yuan ($25 billion) as of end-June, and more than $300 billion of liabilities.

Senior Chinese officials are increasingly seeking to reassure investors about the health of the property sector as Evergrande’s deadline approaches. While there are “individual problems” in the real estate market, the risks are controllable overall, Vice Premier Liu He said. Market moves are a “stress reaction” to some defaults, and property sector financing is becoming normal, People’s Bank of China Deputy Governor Pan Gongsheng said.

The company said late Wednesday that real estate sales plunged about 97% during peak home-buying season, while the company may not be able to meet its financial obligations. Its shares tumbled as much as 14% on Thursday after resuming trading following a three-week halt.

Default may make it harder for Evergrande to free up cash by selling assets. Typically companies in default are required to get approval from creditors on future asset sales. In the case of Evergrande, bondholders may demand this if they file a bankruptcy petition for the Hong Kong-listed company, according to Fan.

HNA Group Co.’s lengthy process of restructuring is a possible precedent and underscores the risks for creditors awaiting repayment -- it’s taken years for the conglomerate to divest some of its assets.

A default by Evergrande may worsen contagion among the nation’s indebted property developers, which are already straining under weakened funding access, rising borrowing costs, and falling sales.

Even if Evergrande makes the payment, the company has a hefty wall of maturing debt next year with some $7.4 billion coming due in onshore and offshore bonds. It needs to pay interest on another four dollar notes this year.

The failed sale of a stake in Evergrande Property Services Group Ltd. also underscores how founder Hui Ka Yan’s usual strategy of using wealthy backers to rescue the group during times of trouble is no longer working.