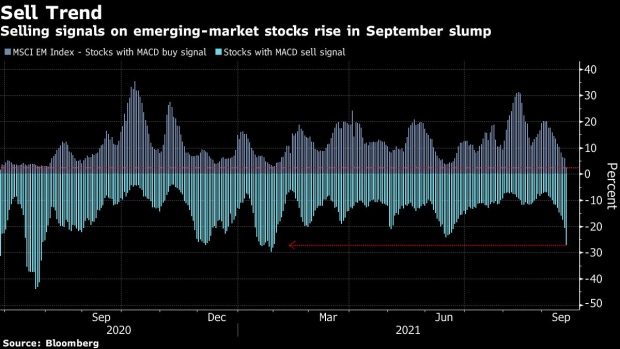 (Bloomberg) -- The chorus of emerging-market bears is getting louder as China Evergrande Group’s debt crisis turns a week already fraught with risks into a minefield.

The fallout comes at a fragile time for investors in the developing world. They’re bracing for the Federal Reserve to wind down stimulus amid signs the global economic rebound from the pandemic is fading. Any risk-off turn would only be compounded by a potential default from China’s Evergrande Group, sending shockwaves through the financial system.

This combination of headwinds “is not a healthy cocktail for EM risk,” said Paul Greer, a London-based money manager at Fidelity International, whose developing-nation debt fund outperformed 95% of peers this year. “We expect emerging markets to remain on the back foot into the end of the quarter at least.”

Fidelity International has been reducing its exposure to developing currencies, Greer said, adding that spreads on most emerging-market dollar debt aren’t enough to compensate for the risks.

So far, stocks have been the hardest hit, declining almost 4% this month, compared with a 0.4% drop in the dollar debt of emerging-market borrowers. MSCI Inc.’s gauge of developing currencies has declined 1.7% from an all-time high reached in June.

“Everything pales against the Evergrande saga at the moment,” said Witold Bahrke, a Copenhagen-based senior macro strategist at Nordea Investment. “We doubt the Fed will be willing to provide a cure to the markets’ Evergrande-malaise in the short-term.”

Commodity-linked currencies such as the Colombian and Chilean pesos and Brazilian real are the most vulnerable, he said.

For some, this week’s rout offers an opportunity to buy undervalued stocks. JPMorgan Chase & Co. strategists led by Marko Kolanovic told clients they “maintain a pro-risk allocation” in their emerging-market model portfolio geared “toward cyclical sectors focused on reopening and reflation.”

Still, the number of shares in the MSCI Emerging Markets Index with a sell signal, based on the moving average convergence-divergence pattern, has jumped to levels last seen in January.

“It’s hard to envisage the Evergrande debacle getting resolved in the very near-term,” said Greer at Fidelity International. “At the same time, the incremental push from the Fed towards QE taper, while not unexpected, will still provide another headwind for the market to navigate.”