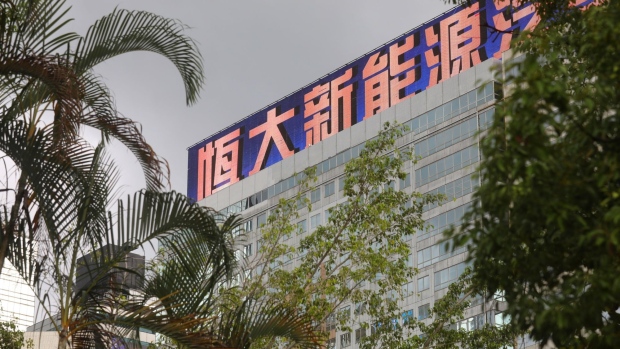 The China Evergrande Centre in the Wan Chai area of Hong Kong, China, on Monday, Sept. 20, 2021. China Evergrande Group bondholders are about to find out if the property giant's liquidity crisis is as dire as it appears with interest payments on two notes due Sept. 23. Photographer: Lam Yik/Bloomberg , Bloomberg

(Bloomberg) -- China Evergrande Group is unlikely to receive direct government support and is on the brink of defaulting on upcoming debt payments, S&P Global Ratings said.

“We believe Beijing would only be compelled to step in if there is a far-reaching contagion causing multiple major developers to fail and posing systemic risks to the economy,” it said. “Evergrande failing alone would unlikely result in such a scenario.”

Contagion worries have fueled a global selloff, as investors weigh policy tightening that’s hit the property sector in the past year through the “three red lines” effort to restrain debt growth. Debate has mounted about how much China’s government may help Evergrande or other builders, after it took months for plans to emerge for China Huarong Asset Management Co., one of the country’s major managers of distressed assets.

Evergrande’s saga is coming to a head. Chinese authorities previously told major lenders not to expect repayment of interest on bank loans due this week. Interest also comes due Thursday on two of the developer’s bonds.