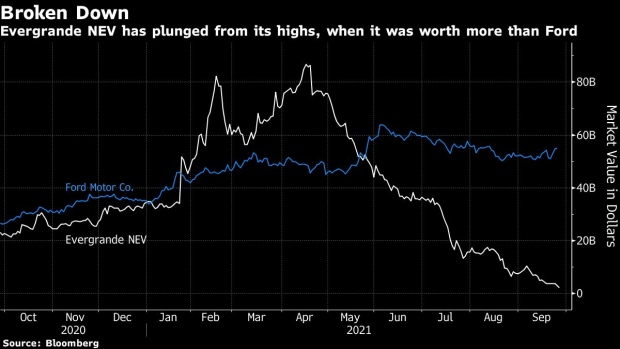 The China Evergrande New Energy Vehicle Group Ltd. research headquarters in Shanghai, China, on Friday, Sept. 24, 2021. China Evergrande Group's electric-car unit missed salary payments to some of its employees and has fallen behind on paying a number of suppliers for factory equipment, according to people familiar with the matter, evidence the stricken property developer's debt woes are having an impact beyond its core business. , Bloomberg

(Bloomberg) -- China Evergrande Group’s electric-car unit plunged in Hong Kong trading after it warned of a “serious shortage of funds” and scrapped plans to list in Shanghai, adding to concerns it may never reach its goal of mass vehicle production.

Shares of China Evergrande New Energy Vehicle Group Ltd. fell as much as 26% in early trading, taking their decline this year to about 94%. The company has shed more than $84 billion in market cap from its peak in April, when it was valued at more than Ford Motor Co.

In a statement late Friday, Evergrande NEV said it has suspended paying some of its operating expenses and some suppliers have suspended work. The statement confirmed an earlier report by Bloomberg News that the company had missed salary payments to some workers, and fallen behind on paying a number of suppliers for factory equipment.

The cashflow difficulties mean the carmaker that once had ambitions to take on Elon Musk’s Tesla Inc. in the electric-vehicles industry will now likely miss its target to start mass deliveries next year. The turmoil is symptomatic of the crisis gripping the parent company -- the world’s most-indebted developer -- which has roiled global markets on concern it will default.

In a further sign of the EV unit’s struggles, it said Saturday it won’t proceed with a planned issue of yuan-denominated shares on the Science and Technology Innovation Board of the Shanghai Stock Exchange.

At it’s peak, Evergrande NEV was one of the most valuable assets in Evergrande founder Hui Ka Yan’s empire, and a potential source of funds to prop up the parent company. However, the firm said earlier this month that “no material progress” had been made to sell a stake in the EV unit, which is now trying to offload assets of its own.

Friday’s statement said Evergrande NEV -- officially created when Evergrande Health changed its name in July 2020 -- is negotiating to sell some of its aged-care projects and overseas assets in order to “supplement working capital.” However, it’s uncertain whether any deal will be struck.

Last month, Evergrande NEV reported a 4.8 billion yuan ($742 million) loss for the six months to June 30 and revenue of 6.92 billion yuan, the vast majority of that -- 6.89 billion yuan -- from the health and aged-care business.