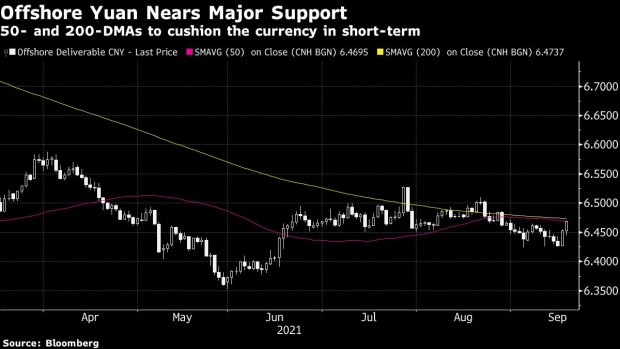 China Evergrande Group's Evergrande Center in Shanghai, China, on Wednesday, Sept. 15, 2021. Chinese authorities have told major lenders to China Evergrande Group not to expect interest payments due next week on bank loans, according to people familiar with the matter, taking the cash-strapped developer a step closer to one of the nation’s biggest debt restructurings. Photographer: Qilai Shen/Bloomberg , Bloomberg

(Bloomberg) -- The offshore yuan -- the exchange rate for China’s currency trading outside of the country -- is about to become the center of attention in financial markets around the world.

The offshore currency is one of the few Chinese assets that trades around the clock, meaning it will come under scrutiny from investors bracing for any fallout from a potential default by China Evergrande Group on Monday. Other options to assess contagion will be limited due to holidays that will close trading in China and Hong Kong during the week.

The offshore yuan lost a total of about 0.7% on Thursday and Friday, primarily due to a stronger U.S. dollar and selloff in emerging-market peers. The currency now trades near its 50-day moving average of around 6.4696 per dollar and may extend its weakening to test the 200-day moving average at 6.4737 if market sentiment worsens on Evergrande. A breach of the 200-day average opens up a path toward 6.50 level, last seen on Aug. 23.

Major banks were already told by Chinese authorities that they won’t receive interest payments due on Evergrande loans on Monday. It is also unclear whether Evergrande intends to pay about $84 million of dollar-bond interest due Thursday, Sept 23.

Policy makers and businesses alike are preparing for potential market contagion. The People’s Bank of China on Friday added $14 billion (90 billion yuan) of funds on a net basis through repo agreements, the most since February, in a bid to avert any funding squeeze.

Agricultural Bank of China, among the big-four state-owned lenders, made bad-debt provisions for its Evergrande exposure, according to Reuters. Banks are readying themselves for a liquidity squeeze, part of the reason why they are dumping dollars in onshore swap markets, leading to tight liquidity conditions in the onshore yuan, some analysts say.

Here’s a list of Evergrande debt events and market schedules for the week ending Sept. 24: