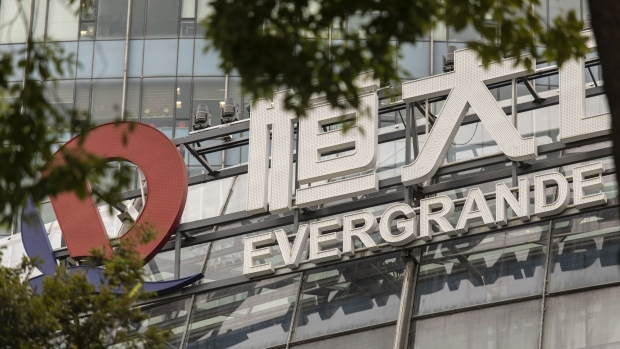 (Bloomberg) -- China Evergrande Group is planning to “actively engage” with offshore creditors to formulate a viable restructuring plan of the developer’s debt, according to a statement from the company.

“There is no guarantee that the group will have sufficient funds to continue to perform its financial obligations,” given the company’s current liquidity status, Evergrande said in a filing to the Hong Kong stock exchange late on Friday. The company said it had received a demand to perform its obligations under a guarantee in the amount of approximately $260 million.

Evergrande is struggling to raise cash to meet its more than $300 billion in liabilities, fueling concerns it’s heading for a default that could hurt the world’s second-largest economy. In its statement, the company said if it’s unable to meet its guarantee obligations or certain other financial obligations, it may lead to creditors demanding acceleration of repayment.

The developer has become one of the biggest casualties of Chinese President Xi Jinping’s years-long effort to wring the excesses out of the country’s debt-laden real estate sector. The question looming over global markets is whether Xi can tackle the problem -- and pull off a sweeping campaign to bring “common prosperity” to China -- without derailing the economy’s fragile recovery from the pandemic.

Senior Chinese policy makers have tried to reassure investors that risks from Evergrande are contained, even as they signal a reluctance to bail the company out. The crackdown has begun to weigh on the real estate industry, which is now seeing home sales plunge and prices snapping a six-year streak of increases.

Authorities are laying the groundwork for a debt restructuring, assembling accounting and legal experts to examine the finances of the group, Bloomberg has reported. Evergrande has also hired financial advisers that are known to handle restructuring.