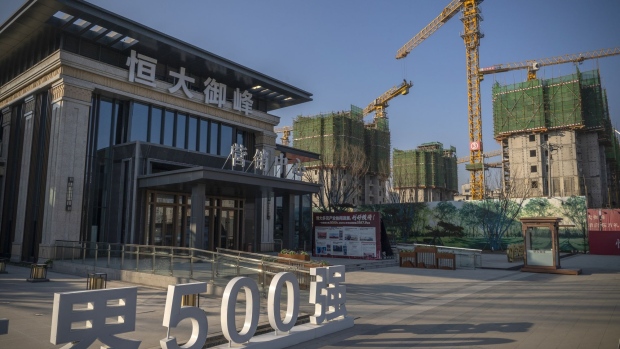 The sale office in front of unfinished apartment buildings at the construction site of a China Evergrande Group development in Beijing, China, on Thursday, Jan. 6, 2022. Evergrande is seeking to delay an option for investors to demand early repayment on one of its yuan-denominated bonds, in the latest sign of distress amid a broader real estate debt crisis. , Bloomberg

The developer seeks more time from overseas investors to fully consider uncertainties and risks in order to make a debt risk disposal plan that will protect the interests of various parties, the company said in a statement. Evergrande is drafting a detailed and effective debt restructuring plan and is actively maintaining dialogue with offshore creditors, it said.

Evergrande’s ad-hoc group of offshore bondholders said last week that the Chinese developer failed to substantively engage with it about restructuring efforts, and will “seriously consider enforcement actions” to protect investor’s interests. The company’s offshore investors seek to be consulted before any further assets are sold, with the group saying Evergrande’s “lack of engagement and opaque decision-making to date is contrary to well-established international standards in restructuring processes of this magnitude.”

Evergrande’s restructuring is currently being led by the Chinese government. The developer has started to identify bondholders, Bloomberg reported last week and Evergrande said that it will hire more financial advisors. Evergrande, saddled with $305 billion of liabilities as of mid-2021, was deemed to be in default in December after missing dollar-bond payments.