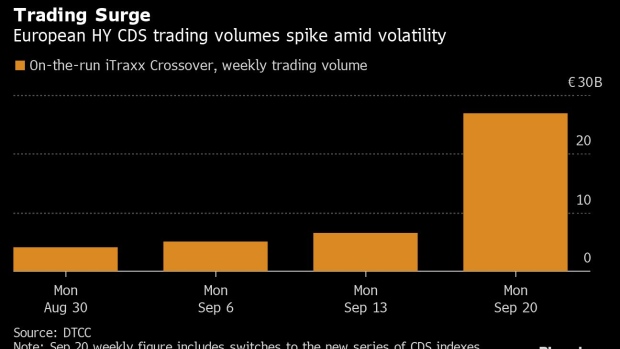 (Bloomberg) -- When investors wanted to flee the fallout from China Evergrande Group, those in Europe’s 500-billion euro ($584 billion) high-yield bond market found some of the normal escape routes blocked.

As trading stagnated in the market for the region’s riskiest bonds, investors were reminded of the problem of buying illiquid securities from an array of sometimes small unlisted companies. When it came to the crunch, credit derivatives indexes offering insurance on junk bonds proved the best avenues to unload positions, according to Jochen Felsenheimer, managing director at XAIA Investment in Munich who trades CDS and bonds.

“The CDS market looks much more like a market should look like,” Felsenheimer said, referring to credit-default swaps. “Bond markets rather look like a supermarket after Brexit.”

Volumes on Europe’s iTraxx Crossover index jumped to 26.8 billion euros from 6.5 billion euros after Evergrande’s crisis erupted. By contrast, volumes for cash markets remained at seasonal averages. Risk premiums were also little changed, even as the rest of the world’s markets convulsed and spreads on CDS linked to European high-yield bonds spiked.

Part of the surge in CDS volumes was down to the introduction of a new series, but not all. The last roll in March triggered a doubling of volumes, to 23 billion euros from 10 billion euros.

In a liquidity crunch, it’s easier to buy and sell standardized swaps rather than finding a buyer for one of thousands of corporate bonds all offering different terms, risks and maturities.

It was the same story in 2018 when a string of credit blow-ups sent investors flocking to more liquid CDS indexes to reduce exposure to corporate debt, according to Felsenheimer.

This year, corporate revenues are rebounding as the world’s economies recover from the pandemic, and default rates remain low. That could all change as ebbing central bank stimulus cuts off support to an army of “zombie” companies that have survived on a diet of central bank stimulus and staved off default for years.

“When the market does turn and they need to sell,” asset managers may struggle to find an exit, Felsenheimer, who’s recently switched to more defensive positioning, cut risk and cashed out of some holdings.

A busy session is expected in Europe’s primary market as 11 issuers with 11 tranches are slated to price so far today, totaling at least 4.68 billion euros equivalent.

A few borrowers ventured back into Asia’s primary market with mandates for new dollar bonds, after a plunge in issuance amid concerns about China Evergrande Group.