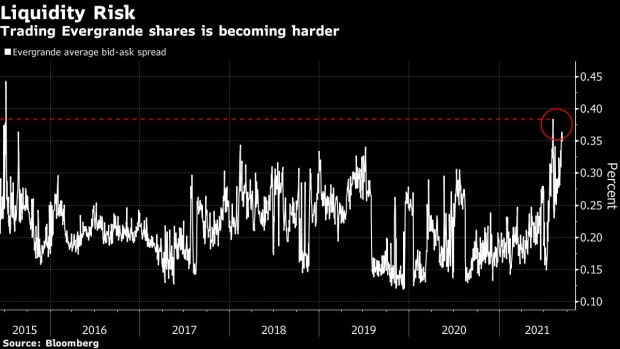 (Bloomberg) -- Getting out of China Evergrande Group’s shares is becoming increasingly difficult, according to a measure of market liquidity.

The stock’s average bid-ask spread -- or the gap between prices sought by buyers and sellers -- has more than doubled to 0.35% since July and is near the widest since the bursting of China’s stock bubble in 2015, according to data compiled by Bloomberg. The spread also affects transaction costs, making Evergrande one of the priciest stocks to trade in the Hang Seng China Enterprises Index, the data show.

While it’s normal for bid-ask spreads to widen when trading turns volatile, it adds to the difficulty for those wanting to exit their positions. Chairman Hui Ka Yan controls more than 70% of Evergrande’s equity and the company’s stock buybacks have mopped up liquidity in the past. Volume on Monday was the lowest in eight days even as the shares sank almost 7%.

Evergrande fell as much as 8.6% in Hong Kong on Tuesday after saying it hired two financial advisers known for their expertise on debt restructuring -- a scenario where shareholders risk getting wiped out. A haircut of 75% for offshore bondholders is now a base case for some analysts.