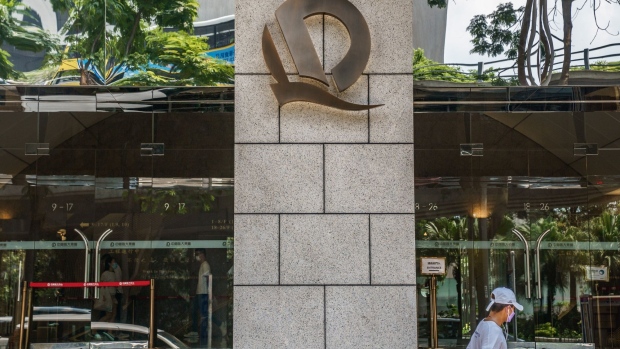 (Bloomberg) -- Two more companies said China Evergrande Group failed to pay its bills on time, adding to signs of a cash crunch at the world’s most indebted developer.

Huaibei Mining Holdings Co Ltd. filed a lawsuit against Evergrande in Anhui province, alleging a unit of the company missed payments, according to a filing to the Shanghai stock exchange. The company is demanding about 401 million yuan ($62 million) for fees and breach of contract. Another company, Peace Tree Wood Ltd., said Evergrande missed payments on 2 million yuan of commercial bills.

Evergrande’s suppliers are increasingly resorting to publicizing their beefs with the developer to seek payments, a trend that may spark further investor concern about the company’s financial health. Equity and bond holders have been rattled in recent weeks by a slew of reports about wary banks and unpaid bills. Evergrande’s credit rating was cut by S&P Global Ratings and Fitch in recent days.

“The spate of lawsuits over debt payments faced by Evergrande suggests that the company is now facing liquidity issues,” said Chang Wei Liang, a macro strategist at DBS Bank Ltd. in Singapore. “Not every creditor will be willing to go to court for now, but a flurry of lawsuits could trigger a scramble by creditors to protect their interest.”

Evergrande didn’t respond to emailed requests for comment. A unit of Huaibei Mining worked as a contractor for an Evergrande construction project in Anhui.

So far, the strategy of publicizing disputes has been working. Shanghai-listed Skshu Paint Co. said in a June 28 exchange filing that it held 51 million yuan in overdue Evergrande bills and that only 4% was recovered by May 31. A day after Skshu made the filing, it said Evergrande repaid the bills.

Commercial bills have become a popular financing tool in China’s real estate industry, which has become subject to a growing number of borrowing restrictions in recent years. Evergrande’s main onshore subsidiary had about $32 billion of commercial bills outstanding as of December, the most of any major Chinese real estate company.

Bills come in many different forms, often depending on the specifics of a developer’s relationships with suppliers. In situations where the developer has a stronger bargaining position, it might agree to simply postpone immediate payment for a service without providing extra compensation.

Evergrande jumped 5% in Hong Kong Thursday, joining a rebound in Chinese equities after several days of sharp declines. The company’s shares could drop another 40% from Monday’s closing price, UBS Group AG analysts said in a report.