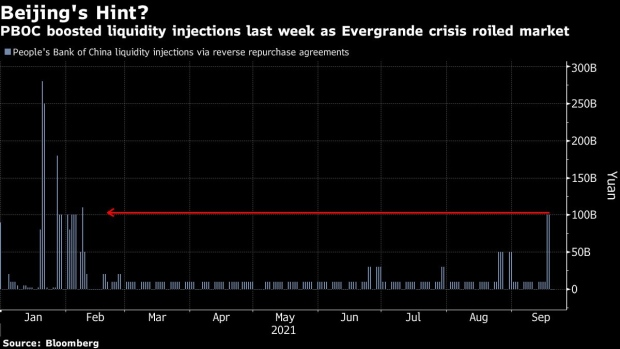 (Bloomberg) -- Investors seeking hints about how Beijing plans to deal with China Evergrande Group’s debt crisis are training their crosshairs on the central bank’s liquidity management.

The People’s Bank of China will resume daily open-market operations Wednesday after a holiday break, and a large net injection may signal Beijing’s intent to reduce systemic stress after the Evergrande crisis roiled global equities. On the other hand, if the PBOC withdraws funds, that could mean it’s prepared to tolerate higher market volatility as the developer moves closer to a default.

The need to calm market jitters may be even more pressing if mainland stocks slide at the resumption of trade Wednesday as they catch up with losses made offshore. The Hang Seng China Enterprises Index, a gauge of Chinese equities traded in Hong Kong, slumped more than 3% when China was shut Monday and Tuesday, while Wall Street analysts sought to reassure investors that Evergrande won’t lead to a Lehman moment.

“China has left the market on tenterhooks,” said Zhou Hao, senior economist at Commerzbank AG. “Traders can’t figure out Beijing’s thoughts on how the Evergrande crisis will be resolved and how weak the economy is allowed to be. In the near term, the PBOC will inject sufficient short-term liquidity to maintain ample cash supply.”

Uncertainty over how financial troubles at China’s largest property developer -- with $300 billion of liabilities -- would be resolved has swelled as the authorities refrained from providing any public assurances on a state-led resolution. Official media commentary has largely shunned the subject, apart from a tabloid that said Evergrande was an “isolated case.” China’s slowing economy has compounded investor angst.

Still, while mainland equity markets may follow the rout in Hong Kong stocks on Wednesday, many analysts -- including those at Citigroup Inc., Barclays Plc and UBS Group AG -- say the Evergrande crisis isn’t likely to be the country’s “Lehman moment.”

The PBOC has at least been moving in the right direction, boosting cash injections last week to the highest since February. The central bank will need to add a net 130 billion yuan ($20 billion) on Wednesday to ensure liquidity matches Saturday’s level.

China’s cash operations have been aimed at striking a balance between spurring growth hurt by fresh virus outbreaks and tighter regulations, while preventing asset bubbles. Authorities also tend to loosen their grip on liquidity toward quarter-end due to increased demand for cash from banks for regulatory checks. Lenders also need to hoard more funds ahead of the one-week holiday at the start of October.

Some $83.5 million of interest on a five-year dollar bond sold by Evergrande will mature Thursday, and failure to pay within 30 days may constitute a default. The firm also needs to pay a 232 million yuan coupon on an onshore bond the same day. Commercial banks will announce the latest benchmark loan rate on Wednesday, although analysts expect the one-year rate to be kept unchanged at 3.85%.