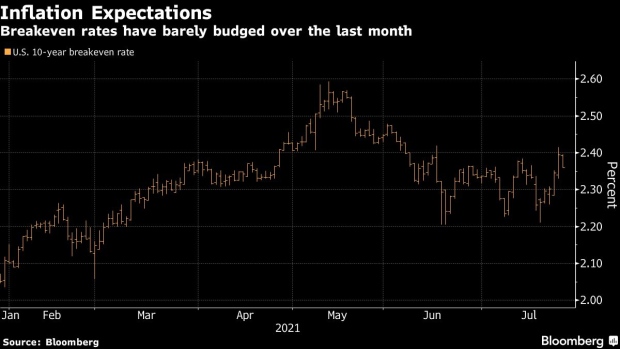 (Bloomberg) -- It’s everywhere. At the White House. In consumer data. On earnings calls: Anxiety that inflation is about to gut the economy. Two places it isn’t are the stock and bond markets, where investors have taken Jerome Powell’s “transitory” mantra to heart.

Breakeven rates -- a gauge of bond market inflation expectations -- have barely budged in a month, even after the hottest price print in more than a decade. Meanwhile, tech giants -- thought to be vulnerable to a pickup in price pressures -- have overpowered cyclical shares, which normally fare better in an inflationary environment.

The divide highlights a dynamic that has persisted since pandemic lockdowns began 16 months ago: Economic hardships crimping companies real time, while markets stay calm on grounds this too shall pass. So far it’s been a winning strategy for investors, who stood firm amid the deepest recession in generations and now seem bent on reprising the high-wire act as the latest stresses play out.

“It really is a major dislocation, becoming more apparent as the earnings season goes on,” said Seema Shah, chief global strategist at Principal Global Investors. “Companies don’t have the luxury of looking through current cost pressures as it impacts their businesses right now.”

The mood is far from sanguine outside financial markets. Roughly 87% of S&P 500 companies that have released earnings in July mentioned inflation in conference calls as of last week, according to data compiled by Bloomberg. Meanwhile, Americans concerned about higher living costs dragged a consumer sentiment reading below all analysts forecasts this month, and the White House is reportedly shifting its language around inflation to ward off Republican attacks.

It’s a starkly different cross-asset landscape from just a few months ago, when a heady combination of soaring vaccination rates and stimulus checks sent inflation expectations skyrocketing to the highest level in nearly a decade. That weighed on duration-heavy tech shares for a spell, with the Nasdaq 100 briefly entering correction territory in March.

Here’s what others are saying:

Peter Boockvar, chief investment officer for Bleakley Advisory Group: “Most people feel it’s transitory or at least the Fed is on top of things. Both are wrong I believe,” he said. “If we see a few more months of well above-trend inflation in the CPI stats, they will get worried again. There is this amazing nonchalance on inflation in markets, and I think there will be another wakeup call soon.”

Michael O’Rourke, chief market strategist at JonesTrading: “The reason a market-based indicator like breakevens doesn’t exhibit the same inflation fears as consumers and companies is that it when it comes to Treasuries, the Federal Reserve is the market,” he said. “It is dangerous to look at the Treasury market as an indicator of market-based pricing of inflation and economic sentiment when the Federal Reserve is purchasing approximately $1 trillion of Treasuries a year and holds nearly 20% of the nation’s outstanding debt.”

While inflation has been hotter and perhaps more persistent than many economists forecast, a bulk of the jump has been driven by reopening-adjacent components. June’s consumer-price index release showed that used vehicles accounted for more than a third of the gain, according to Labor Department data.

Those factors have helped investors brush off price pressures as temporary -- a point Federal Reserve chief Powell has been hammering home for months. However, corporations and consumers haven’t been able to do the same as easily. Companies such as paints and coatings producer PPG Industries Inc., beverage-maker Coca-Cola Co. and industrial supplies distributor Fastenal Co. have already warned of higher costs, a few weeks into the second-quarter reporting season.

Meanwhile, the average American is also feeling the squeeze. CPI jumped 5.4% in June versus a year earlier, while year-over-year average hourly earnings growth clocked in at 3.6%. That means consumers are paying more on average, while their wage increases lag behind.

“It’s just a function of timing and the difference between how Main Street thinks about this, and how the market thinks about this,” said Art Hogan, chief strategist at National Securities. “The market truly believes a lot of this is transitory, where the consumer likely has a harder time believing that.”

But the divide between market complacency and corporate worry can only last for so long, according to Principal Global’s Shah. Should the supply-side pressures squeezing input costs higher fail to abate as quickly as investors expect, that will eventually bleed into markets, she noted.