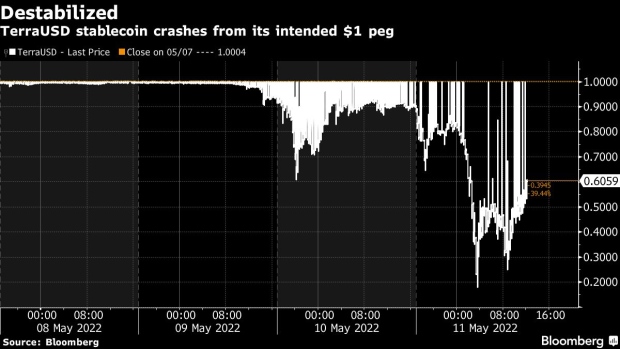 The Luna token price on the Terra Station Dashboard on a laptop computer arranged in Hastings-on-Hudson, New York, U.S., on Sunday, April 10, 2022. A nearly 20% interest rate is unheard of in most of traditional finance. But that's exactly what Anchor Protocol is promising people willing to deposit the crypto stablecoin UST into its decentralized finance app. , Bloomberg

(Bloomberg) -- A celebrated experiment that combined math and software to get a digital currency to behave like a dollar is crashing in dramatic fashion, posing the biggest test yet to decentralized finance and the will of its backers to defend it.

TerraUSD, or UST, is an algorithmic stablecoin, meaning it uses a complex combination of code, trader incentives, smart contracts and no small amount of faith to maintain its peg of one-to-one to the dollar. It does this by working with a crypto token in the same ecosystem, Luna, which can be swapped for UST and vice versa by traders to keep the price of UST where it should be.

The point of projects like UST is to enable crypto traders to make transactions easily and quickly without needing to leave the digital asset ecosystem, rely on intermediaries or worry about the value of their coins going up and down. By using software programs to manage the token’s volatility, the opportunities for profiting off arbitrage are even greater — DeFi lender Anchor Protocol was known for offering market-beating rates of up to 20% to traders willing to deposit UST on its platform. In summary, it’s the crypto dream.

A month ago, the future looked bright for Terra and its main backer Do Kwon: a consortium called the Luna Foundation Guard aimed at providing collateral for Luna — then at an all-time high value of $119 — had bought more than $1.5 billion in Bitcoin to shore up UST’s peg, with its members reading like a Who’s Who of crypto. But on Monday, all of the mechanisms that were supposed to keep UST stable, weren’t — it fell to a low of 60 cents on that day, and reached a further low of around 20 cents in another crash on Wednesday, taking its market value down from $18.4 billion to $5 billion. Luna also fell considerably, dropping to as low as $2.35.

“Many people were caught off guard,” said Nikita Fadeev, partner and head of crypto fund Fasanara Digital, which de-risked its position in advance of the crash. “Everything broke there. It is full capitulation.”

Exactly why all of Terra’s carefully-planned mechanisms failed to do their job remains unclear, and conspiracy theories abound about shadowy actors with untold wealth to play with. But one thing’s for certain: Kwon isn’t going down without a fight.

He’s now attempting to raise $1.5 billion from new and old investors alike to provide more collateral to UST, hoping to rebuild the token’s liquidity after it virtually disappeared from order books overnight. Some suspect that $1.5 billion won’t even be enough, and it could take days, if not weeks, for UST to re-peg to the dollar.

“Once liquidity evaporated, this perpetuated the collapse of the stablecoin,” said Clara Medalie, research director at Kaiko, in an email. In order for UST to re-peg, she said, buy orders from crypto traders will need to consume all of the asking price’s liquidity to get it up to $1. “This morning, there is virtually nothing left.”

Terraform Labs, which powers the Terra blockchain, is backed by firms including Galaxy Digital, Pantera Capital and other players in crypto.

Among the firms that were approached via a round robin in the latest financing attempt were Nexo and crypto banking app Cashaa, which declined to participate. Meanwhile, crypto firm Celsius said it “was not and is not involved” in any Luna bailout.

Anchor, now a shadow of its former self as the main driver of demand for UST on the Terra network, has proposed temporarily cutting its interest rate to a minimum of 3.5%. While its total amount deposited sat as high as $14 billion on Monday, it had around $3.6 billion in UST still on its books by mid-afternoon in London on Wednesday.

Already, comparisons with the 2008 financial crisis have started to roll in. Hallmarks of shadow banking, such as circular market mechanics and extremely high leverage, are readily visible among Terra’s ecosystem, something that academics fear could create a second, digital wave of failed lenders and wiped-out savings.

“It will get worse before it will get better — way too much UST is looking to exit, and the death spiral is very reflexive at these levels,” added Fadeev. “It’s a long road ahead.”