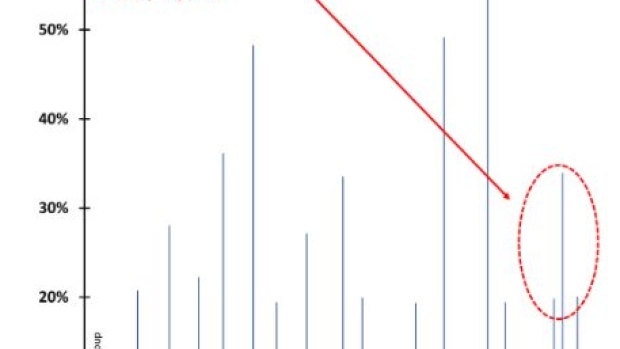 (Bloomberg) -- When the nineties ended, an overvalued stock market took three long years to rid itself of its accumulated excess in what is now known as the dot-com crash.

That a similar reckoning has needed just 14 months to play out now is a sign of how fast moving this market is -- and how dangerous it’s become for anyone believing they can pick a moment to buy and sell.

The perils were on full display Friday as a hot inflation reading jolted financial markets, shaking the S&P 500 out of a range it had settled into this month. Investors who had seen the index rally 9% since it nearly tipped into a bear market May 20 were blindsided by the latest bout of selling.

Persistent inflation is only the latest threat to a market pounded by a flurry of macro blows. Trying to figure out which matters most has become something of a fool’s errand. That’s essentially the view of Eric Schoenstein, co-manager of the $9.7 billion Jensen Quality Growth Fund (ticker JENSX), which according to Bloomberg data has beaten 96% of peers in the past year. With inflation, the Federal Reserve, a pandemic and war bearing down on investor psyches, the only safe bet at this point is that equity volatility will continue.

“It just feels like there’s nothing that you could point to and say, ‘that’s the reason, and if we get this piece cleared up, everything will pass and we can move on to the next iteration,’” Schoenstein said by phone. “With all of that uncertainty, the market is going to pull back, and investors, frankly, are probably in a mode where they’re doing a bit more indiscriminate selling.”

The S&P 500 tumbled more than 2.5% as of 11:05 a.m. in New York Friday, as unexpectedly hot consumer-prices fueled bets the central bank will have to toughen its battle against inflation. Down almost 5% over five days, the index in course for its worst week since January.

That tendency to sell whatever you can has contributed to an epic drop in valuations. After peaking above 30 times earnings a year ago, the S&P 500’s multiple shrunk by roughly 40% through its trough in May -- almost matching the size of the contraction during the entire 2000-2002 crash.

In other words, the correction to valuations is happening three times faster than the bursting of the internet bubble.

To Bloomberg Intelligence’s Gina Martin Adams, the accelerated drawdown reflects how much the post-pandemic equity rally relied upon the Fed. Once the central bank turned hawkish, the unwinding was vicious.

“When easy money disappears, the bubble disappears,” Martin Adams said. “The foundation of the bubble in the 1990s was market psychology about growth prospects and equity ownership. It was harder to deflate.”

Thanks to solid earnings, the meltdown in P/E has done less damage to the market on the price level. Still, down 19% from its January peak to the May bottom, the S&P 500 just endured its third retrenchment of at least that magnitude in four years. Such oft-repeated turbulence had never happened since at least 1950, according to Leuthold Group.

Underpinning the extreme recurrence of equity turmoil is an unusually volatile economic and policy backdrop. After sinking into a recession during the pandemic, the US is now booming after unprecedented government and central bank stimulus. The Fed, which spent most of the past decade fighting deflation, is battling the fastest inflation in four decades.

To the delight of the bulls, the first two losses, one in late 2018 and the other in early 2020, were all but erased in a matter of months. While stocks have yet to recover from their 2022 slide, anyone who had bought shares four years ago and stayed invested would have since enjoyed an annualized return of 12%.

“The fact the S&P 500 has somehow delivered solid results during four years of incredible volatility and uncertainty is fascinating,” Jim Paulsen, chief investment strategist at Leuthold, wrote in a recent note. “Often, the stock market ‘returns’ while most are waiting for the dust to settle. Volatility and uncertainty can be signs of trouble ahead, but they also frequently signal great opportunities.”

But one big difference now is the Fed’s stance. Unlike in 2018 and 2020, when the central bank quickly came to the rescue, such safety net no longer exists with policy makers laser-focused on taming inflation.

Schoenstein at Jensen says he refrains from predicting where equities are heading. Rather than timing the market, he says, investors should focus on picking stocks that will be able to endure any prolonged economic troubles.

His firm has taken advantage of this year’s selloff to add to holdings of stable growers, such as insurance broker Marsh & McLennan Co. and Moody’s Corp., a credit-rating company.