'Selling exhaustion' may call for a better Q4 for markets: Brian Belski

Monday brought a stark warning for Wall Street daredevils: Stocks are still in free fall and bearish sentiment is far from getting exhausted -- especially with hawkish central bankers rattling recession-obsessed markets like this.

The S&P 500 just sank to the lowest since December 2020, bringing this month’s losses to nearly 8 per cent, as the pound weakened to records while commodities buckled under the weight of a hulked-up dollar. US Treasury yields continued to rise, with the 10-year rate climbing as much as 21 basis points to 3.898 per cent, its highest level since April 2010.

Monetary policy makers in Europe and the US gave no succor to risk assets that keep notching wretched milestones in the face of a concerted global increase in interest rates.

To cap it off: Ned Davis Research now sees a 98 per cent chance of a looming global recession while Morgan Stanley Wealth Management’s Lisa Shalett warns earnings optimists are sleepwalking off a cliff.

With bad news around the world piling up, selling pressure is still coming thick and fast for an equity market that’s already enduring its worst performance since 2008.

“Unfortunately, this is just a process that’s going to need to play out because the Fed is not going to stop and the market has to price in accordingly,” Stephanie Lang, chief investment officer at Homrich Berg, said by phone. “There’s still some downside because of the outlook that if we’re not in a recession, we will be in one soon.” 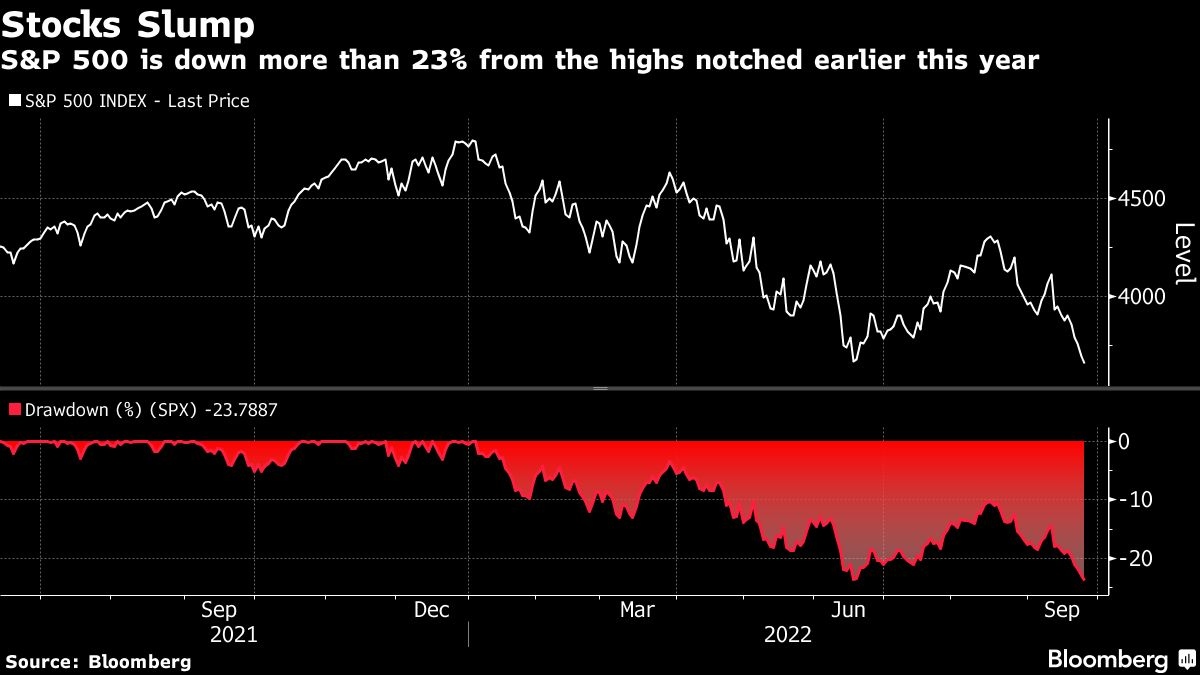 A dark day in UK trading undercut risk appetite across the world, fueling fears that something in financial markets is about to break, while central bankers in Europe and the US touted their inflation-fighting bona fides. The S&P 500 fell for a fifth straight day, tech stocks suffered and the Russell 2000 index of smaller firms lost 1.4 per cent.

Worries over economic growth have percolated for months, but incipient weakness in the industrial cycle and in US housing has investors worried that things are deteriorating quickly.

A global recession probability model by Ned Davis Research recently rose above 98 per cent, triggering a “severe” recession signal. The only other times the model’s been that high was during previous acute downturns, such as in 2020 and 2008-2009, according to the firm’s Alejandra Grindal and Patrick Ayres.

“This indicates that the risk of severe global recession is rising for some time in 2023, which would create more downside risk for global equities,” they wrote in a note. 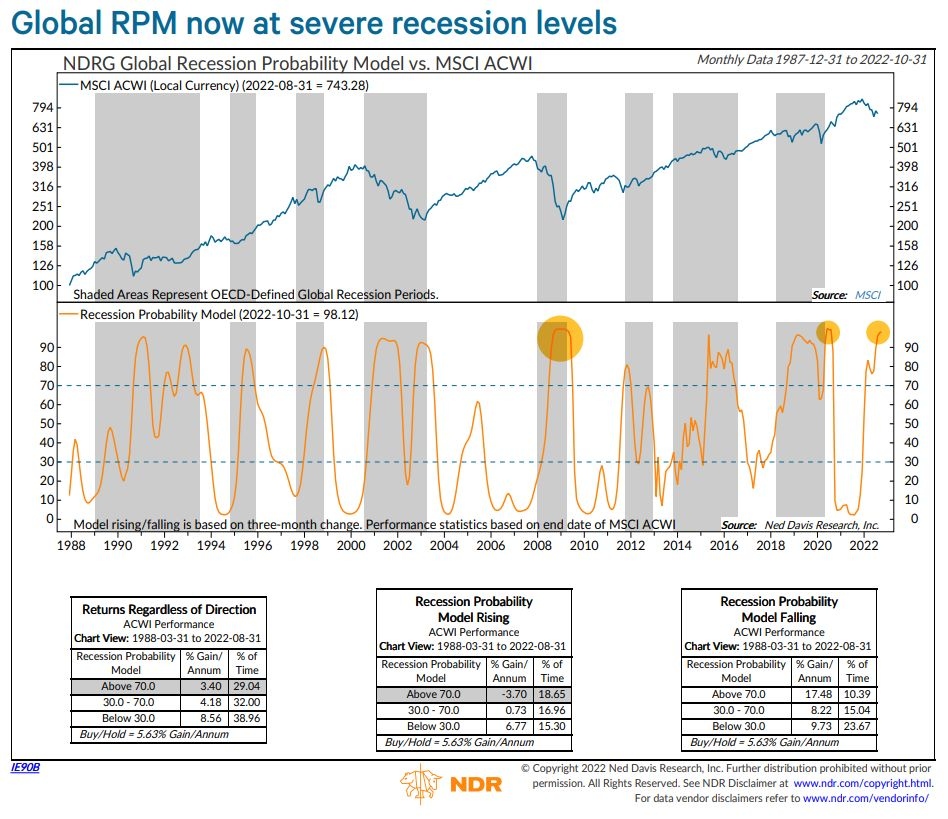 Monday marked yet another session of more than 400 S&P 500 stocks closing lower. Almost every sector posted losses, with real estate and energy each dropping more than 2 per cent. The benchmark index has now spent more than 110 days trading under its 200-day moving average, one of the longest such stretches going back to 2008.

Investors also piled into puts at a record pace on Friday, an event that has preceded previous market bottoms, while a slew of stocks are still trailing their short-term average prices.

Yet fear continues to surpass greed, discouraging dip buyers betting that the market has already bottomed as sentiment and positioning hits hard-to-sustain lows.

“The moves are so intense everyone is waiting to see if something collapses,” said Dennis DeBusschere, founder of 22V Research. “Some very bad market or economic outcome.”

Investors have spent the majority of 2022 resisting the idea of a profits recession -- something that’s looking harder to avoid by the day.

Indications of an economic slowdown, including in the housing market, mean that they could “face a day of reckoning” once they realize that Federal Reserve policy works with a lag, according to Shalett, who is CIO of Morgan Stanley Wealth Management.

The problem is that equity investors tend to only be good at translating economic data into earnings forecasts six months ahead, meaning that any current earnings tailwinds could be supporting “a false sense of security.” Yet policy operates with longer lags, sometimes of as much as two years.

“This bear market is not over and investors should expect more negative surprises if they continue to underestimate the impact of rapidly rising interest rates,” she wrote in a note, adding that a fourth-quarter bear-market rally should be sold. 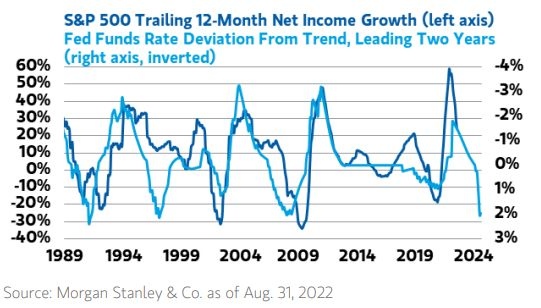 A strong dollar, meanwhile, is posing challenges for global manufacturers. At one point on Monday, it rallied against every major currency, renewing calls of the dreaded “doom loop.”

“We almost have an arms race with central bankers raising rates and employers holding onto workers,” said Mike Bailey, director of research at FBB Capital Partners. “This could play out with pretty steep rates into next spring, which would be bad for bonds and high-growth stocks.”