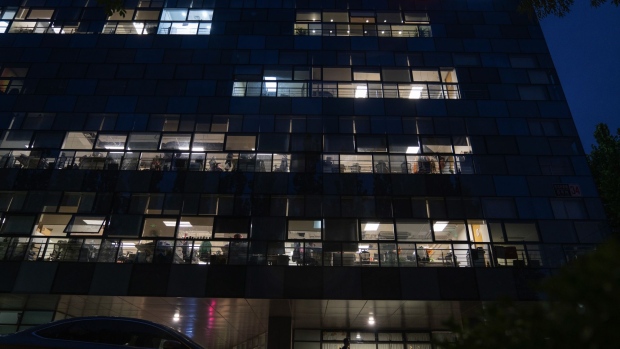 Illuminated office windows at the Didi Global Inc. headquarters at night in Beijing, China, on Monday, July 5, 2021. China expanded its latest crackdown on the technology industry beyond Didi to include two other companies that recently listed in New York, dealing a blow to global investors while tightening the government’s grip on sensitive online data. , Bloomberg

(Bloomberg) -- Didi Global Inc. said on Thursday it plans to delist from the New York Stock Exchange, barely five months after its ill-fated initial public offering drew the wrath of regulators in Beijing. The Chinese ride-hailing giant will pursue a Hong Kong listing instead, allowing existing shareholders to convert their holdings in the company. But Didi’s announcement was scarce on details, leaving investors -- already nursing roughly $40 billion of losses -- with several unanswered questions.

1. Why is Didi going to delist?

Didi’s delisting comes at the behest of Chinese regulators, who had long expressed concern that going public in the U.S. could risk exposing its vast troves of data to foreign powers. Despite regulatory unease, the firm pushed ahead with its IPO in June, a move that Beijing regarded as a challenge to its authority, Bloomberg News has reported. The government reacted swiftly, announcing a cybersecurity probe into the firm days after its debut and taking its services off domestic app stores. Since then, authorities have weighed unprecedented penalties for the company, including a forced delisting. People with knowledge of the matter said last week that Beijing has directed management to come up with a plan to withdraw from the NYSE.

Didi’s move could mark the first in a wave of Chinese delistings from the U.S. Beijing is said to be drafting regulations to effectively ban companies from going public on foreign stock markets through variable interest entities, according to people familiar with the matter, closing a loophole long used by the country’s technology industry to raise capital from overseas investors. Meanwhile, the U.S. Securities and Exchange Commission on Thursday announced its final plan for putting in place a new law that mandates foreign companies open their books to U.S. scrutiny or risk being kicked off the NYSE and Nasdaq within three years.

Instead of a simple privatization from New York, Didi is opting to seek a listing on the Hong Kong Stock Exchange first. The move will ensure that its American depositary shares will be “convertible into freely tradable shares of the Company on another internationally recognized stock exchange,” according to its statement. The firm is planning to file for the Hong Kong listing around March, people with knowledge of the matter told Bloomberg News on Friday, asking not to be identified as the plans haven’t been made public. The entire process could take three to six months to complete, First Shanghai Securities analyst Linus Yip said.

It’s unclear whether Didi can pull off the maneuver. Prior to its U.S. IPO, the company had weighed a potential Hong Kong listing but eventually abandoned that effort after the city’s exchange, which makes far more stringent demands on companies seeking a listing than its New York peers, questioned Didi’s compliance with Chinese regulations. It didn’t have licenses to operate in certain cities and many of its drivers lacked a household registration, or hukou, for the cities where they lived, part of municipal requirements for providing on-demand ride-hailing services there, people with knowledge of the matter said in July.

3. Will U.S. investors swap their stock for shares in Hong Kong?

It depends. Didi has dropped 52% from post-IPO peak, wiping out about $42 billion of market value. SoftBank Group Corp., the largest minority shareholder in Didi, last month reported a record loss at its Vision Fund unit, in part because of the stock’s plunge. Some shareholders may use the delisting as an excuse to exit, while certain retail investors may not be equipped to hold Hong Kong shares.

But for the vast majority of institutional money managers that want to stick with Didi, swapping into a new Hong Kong listing should be relatively straightforward. One question is whether the new shares would trade with a valuation discount: Hong Kong has long been home to some of the world’s lowest price-to-earnings ratios. A gauge of tech shares in the city was on track for a record low on Friday.

4. Does the announcement mark the end of Didi’s troubles?

Unlikely. The cybersecurity probe into Didi is still ongoing, and regulators may still impose an array of punishments ranging from a fine to a suspension of certain operations or the introduction of a state-owned investor, Bloomberg News has reported. The municipal government of Beijing, where the ride-hailing giant is based, had previously proposed that Shouqi Group -- part of the influential Beijing Tourism Group -- and others based in the capital would acquire a stake in Didi, giving state-run firms control of the company.

Didi also needs to appease regulatory concerns over its data security. The company had previously put forth a number of a number of proposals to appease the powerful Cybersecurity Administration of China, including ceding management of its data to a private third party, Bloomberg reported in August. It’s uncertain how such an arrangement, if pursued, would impact Didi’s access to the data, which is crucial to helping the firm orchestrate 25 million rides a day between some 400 million riders and drivers.

Even if those issues are addressed, the months-long probe into Didi has likely already taken a toll. With Didi’s platforms having been barred from Chinese apps stores since July, customers and drivers alike who have upgraded their mobile phones no longer have access to its services, leaving room for smaller competitors to wrest a share of China’s ride-hailing market. President Xi Jinping’s campaign to achieve “common prosperity” has also heaped pressure on platform companies like Didi to offer better wages and benefits to its army of drivers. Agencies including the antitrust watchdog and transport ministry on Tuesday published a set of wide-ranging guidelines for the ride-hailing industry that will require firms to strengthen social insurance while adopting “reasonable” commissions.

It’s also unclear whether top executives will emerge unscathed from the debacle. Regulators could require Didi to reshuffle its top management as punishment for defying Beijing, media including the South China Morning Post have reported. Co-founders Cheng Wei and Jean Liu, together with Senior Vice President Stephen Zhu, control about 50% of the company’s voting rights.