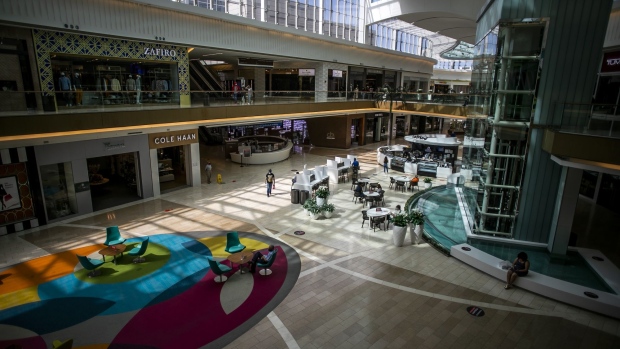 Shoppers in the mall on June 1. Photographer: Xavier Garcia/Bloomberg , Bloomberg

(Bloomberg) -- The grand opening of the Mall of San Juan was a celebration of Puerto Rico’s rosy future. There was confetti, a bomba band and roving politicians, including the governor and the mayor, glad-handing under the atrium’s blue-tinged skylight.

“There was so much enthusiasm,” says Alberto Baco Bague, the secretary of economic development and commerce, who was in attendance that day in 2015. “It was a moment of such hope and brightness.”

Today the complex, which briefly housed the Caribbean’s only Saks Fifth Avenue and Nordstrom stores, is one of the more costly symbols of dashed dreams in the U.S. territory. Only five years old, it’s on the roster of the country’s troubled shopping centers, with more than a third of the retail space deserted. The developer, Taubman Centers Inc., says it has ideas to turn things around. For now, the Mall of San Juan is 631,000 square feet of cautionary tale.

It’s rare for such a high-profile development to come undone so quickly. But the mall finds itself at the nexus of several concerning trends: the exodus of wealth from Puerto Rico, the long decline of the American mall and the litany of disasters — both natural and man-made — that are  keeping tourists away.

Looking back, it’s easy to say the mall never had a chance on an island where almost half the population lives below the poverty line and the median household income is slightly above $20,000, compared to nearly $62,000 across the U.S.

But when Taubman Centers did its due diligence a decade or so ago, it found much to like as it decided to put some $475 million into the project. “The research all showed substantial wealth, growth in tourism, growth in the quality of tourism,” says Bill Taubman, the chief operating officer.

In an investor presentation in August 2014, the real estate investment trust said it expected the mall to perform in the top half of its 22 properties, which include the Beverly Center in Los Angeles and the Mall at Short Hills in New Jersey.

After all, tourism was going strong. The government had poured more than $3 billion into the sector to advertise and build or remodel hotels. The mall site was a quick taxi ride from the port where the big cruise ships docked. The government was courting mainland wealth. It offered new incentives in 2012, the year Taubman broke ground, slashing taxes on interest, dividends and capital gains, enhancing the island’s haven status.

One fan of where Puerto Rico was trying to go was John Paulson, the billionaire hedge fund manager, who took stakes in posh hotels and predicted the island would become the “ Singapore of the Caribbean.”

Baco Bague, who used to run the Puerto Rico Economic Development Bank, saw the mall as a crucial piece of the plan to give the island new economic footing as a white-beaches paradise for high-end remote workers, service-based industries and jet-setting tourists. It “was a very important piece to complete that ecosystem,” he says. “A modern, luxurious shopping center that could compete against any in the world.”

Even if that was plausible, it came too late. The financial crisis was underway by the time Taubman finalized its plans. The recession began in 2006, as changes to the tax code spurred an exodus of pharmaceutical companies and factories, and the population shrank as the economy contracted. (More than 500,000 people — about 14% of all residents — have left since 2010, according to the U.S. Census Bureau.)

In 2015, the year the mall opened, Puerto Rico’s governor acknowledged that the territory couldn’t pay its debts. Two years later, Puerto Rico filed the biggest municipal bankruptcy in U.S. history. Four months after that, Hurricane Maria did an estimated $90 billion in damage, wiping out the power grid, and the clean-up is far from complete.

While the mall withstood the storm’s fury, there was substantial water damage. Mold developed. Dozens of stores had to be rebuilt and some didn’t reopen for more than a year.

Taubman and the Mall of San Juan were defeated before they could really get going, says Jose Caraballo-Cueto, an economist and professor at the University of Puerto Rico.

The virus also got in the way of Taubman’s plan to sell itself to Simon Property Group Inc. for $3.6 billion, with Simon asking a court to nix the deal because Taubman allegedly didn’t take steps to mitigate fallout from the pandemic.

Saks left after the hurricane, and owner Hudson’s Bay Co. hasn't said why it lost faith in Puerto Rico. Nordstrom reevaluated its store network during the pandemic and said it will pull out before the end of the year. The two anchors “never really captured the hearts and minds of the local population or the tourist population,” Bill Taubman says. “We don’t entirely know why.”

One easy answer is that tourists could shop at those stores back home and that too many locals couldn’t afford to at all. And it’s not just Puerto Rico, which may emerge from bankruptcy later this year, where those stores are struggling — luxury retail is facing challenges across North America.

The thing about the Mall of San Juan, though, is that it offers a little bit of something for almost everyone. Sure, it has Louis Vuitton and Gucci, but also a Gap and a Swatch store, plus plenty of places you can grab a burger or an ice cream cone. Pre-pandemic, it was an air-conditioned getaway welcomed by people in nearly all income brackets, even if just as an escapist visit to window shop and take in the view from the mezzanine.

Alejandra Rodriguez, 22, was initially put off by the place. “It seemed contradictory to be opening up such a luxurious commercial space that didn’t seem to match the needs of the country,” she says. “It was being built for tourists and people who just occasionally visit Puerto Rico.”

But she’s come around. Now a sales associate and fashion stylist at Ann Taylor in the mall, she says she appreciates the sweeping ceiling and high-end feel and how it’s far less crowded than the lower-end Plaza Las Americas nearby. It’s a nice place to hang out, though she may not work there much longer: Ann Taylor’s parent company, Ascena Retail Group Inc., just filed for bankruptcy, so the Mall of San Juan could be looking at another vacancy soon.

Taubman Centers — like Puerto Rico — has to figure out a new way forward.

Other department stores might be interested in coming in, or perhaps entertainment venues, Bill Taubman says, declining to offer details about the revamping plans it’s considering.

The developer may have to get creative, says Gabriella Santaniello, founder of the retail consulting firm A Line Partners. Other shopping-center owners have tried to bring theirs back from near death by creating community spaces. “They’re opening laser tag and starting to have more family things like Ferris wheels and carousels.”

Marnie Marquina, the property’s general manager, says that after being forced to shutdown due to Maria and for two months during the pandemic, she’s ready for anything.

“This feels like our third opening,” she says, as she watches security staff squirt hand sanitizer into shoppers’ palms. “Today is another chapter.”