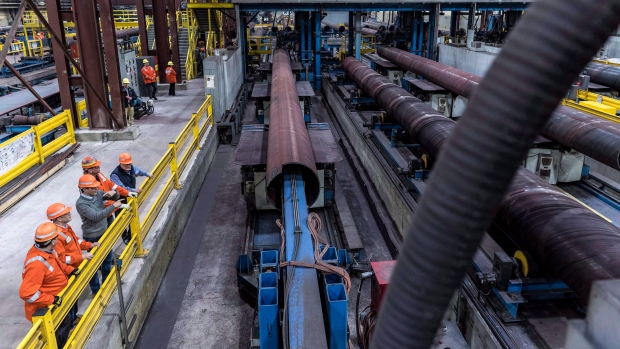 Multi-national steelmaker and mining company Evraz PLC will lay off roughly 500 staff at its Regina plant later this month as lower demand for steel products weighs on the company's Canadian operations.

A layoff notice was posted on the United Steelworkers Local 5890 website on Tuesday that listed the workplace reductions at the Regina facility, which is the largest steel company in western Canada where it manufacturers tubular products such as pipelines for the oil and gas industry.

Canada's steel industry is facing pressure from the COVID-19 pandemic, which has led to a steep reduction in steel demand, a glut of finished product in China, and plunging global raw steelmaking capacity utilization.

Earlier this month, Evraz said its total crude steel production fell 4.4 per cent in the third quarter from the prior quarter, while total steel sales declined by 9.5 per cent.

"These staffing adjustments that began in November and are continuing in December are matching the size of our workforce with the demand for production of certain tubular products," said Patrick Waldron, Evraz North America director of communications and public affairs, in an email.

"In the spiral pipe divisions that means as large projects are completed and work runs out, the layoffs take place. This outlook and the difficult decisions it has forced have been shared with union leadership and team members."

Waldron said that layoffs have also taken place in some of Evraz's Alberta operations earlier this year due to similar reasons. The company's Regina plant will continue to produce steel for the company's Red Deer, Alta. facility, he added. Roughly 1,000 people work at Evraz's Regina facility.

Mike Day, president of the steelworker's union, said the union filed a number of grievances tied to the layoffs and expects "many more to come."

"The company is set on doing things the way they want regardless of what the [collective bargaining agreement] states. We have told the company that this local will not sit idly by nor forget this company’s attack on our members' seniority," Day wrote.