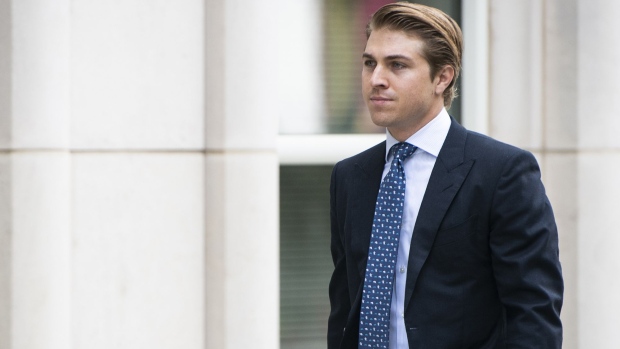 (Bloomberg) -- Tom Barrack’s ex-assistant complained that the ankle monitor that he’s required to wear while awaiting trial along with his former boss for acting as a foreign agent interferes with his surfing and fitness classes as well as efforts to land a new job.

Matthew Grimes, 28, on Thursday asked a Brooklyn federal court judge for a hearing on the electronic bracelet, which most criminal defendants must wear while released on bail.

“The electronic monitoring device on Mr. Grimes’s ankle is uncomfortable and unnecessarily burdensome given that Mr. Grimes poses no flight risk whatsoever,” Abbe Lowell, who recently joined the defense team, said in a filing Wednesday.

“Mr. Grimes is an active 28-year-old,” Lowell went on. “He regularly surfs and attends fitness classes. He cannot immerse the device in water and obviously the ankle bracelet is a subject of notice, comment, and embarrassment in his daily activities. The bracelet comes up when he has started to seek new employment and it is not something that makes that effort easier.”

Barrack and Grimes both pleaded not guilty in July to charges that they illegally acted on behalf of United Arab Emirates in trying to influence U.S. government policy. Barrack, a close friend and ally of former Donald Trump, chaired the former president’s inaugural commitee.

Prosecutors have agreed that Grimes can travel domestically so long as he gives prior notice, and they will lift a curfew on him. The government also agreed to increase the amount he can spend without giving prior notice to $100,000 from $10,000.

The request follows the court’s decision earlier this month to ease the bail terms for Barrack, allowing him to return to work and engage in financial transactions exceeding $2 million, after notifying prosecutors.