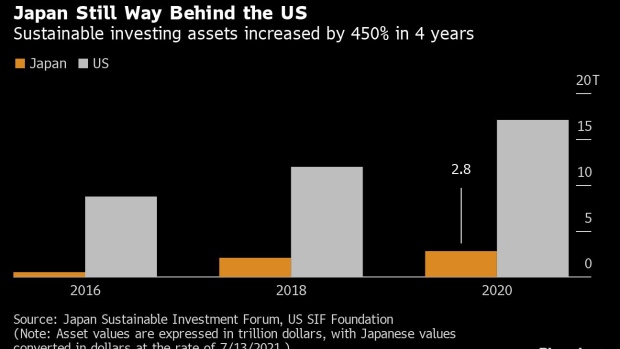 Okazawa, who heads MCP Japan Holdings Ltd., plans to set up the first fund as early as November, raising capital from domestic and international asset managers, banks and insurers to invest in green technology firms over the next five years. He expects to eventually boost the fund to $3 billion, though declined to name any of the potential backers.

Okazawa joins a wave of interest in environmental, social and governance assets in Japan, as more investors and funds seek to move away from fossil fuels, including coal. Japan’s sustainable assets increased more than fivefold from 2016 to 2020, though it still remains well below other rich nations such as the U.S.

Okazawa, former head of institutional and corporate clients for BNP Paribas in Asia, has already been speaking to more than 100 startups and businesses, including a company that recycles waste to make anti-viral paint. He’s also reached out to a farmer who raises free-range cows, yielding beef that’s leaner than Japan’s prized wagyu.

“Cows have a life too. They should be able to walk freely and live long, it’s animal welfare,” Okazawa said in an interview “It’s important to be socially responsible, even if that meant we were to go against the values of economics.”

The company is considering investing in the farm, which is attracting attention from health-conscious consumers in China. Okazawa said he’s also looking to invest in a company that exports agricultural, fishery, and livestock products to China and Southeast Asia.

After leaving his 28-year career as a banker, Okazawa, 51, started in July as the president of MCP Japan in Fukuoka, a city in southern Japan. The firm is a unit of MCP Asset Management Co., a Hong Kong-based company with more than $5 billion in assets under management.

Fukuoka is trying to establish itself as a finance hub, and Okazawa plans to collaborate with Kyushu University and other local entities.