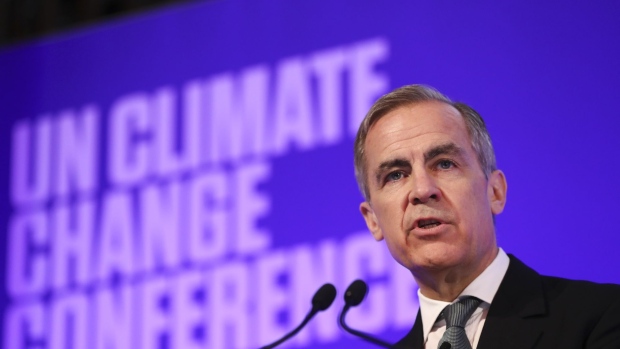 (Bloomberg) -- Brookfield Asset Management raised $15 billion for a fund dedicated to investing in the global transition away from fossil fuels, creating what it calls the largest private vehicle of its kind.

The Brookfield Global Transition Fund is headed by Mark Carney, former governor of the Bank of England and the Bank of Canada, and Connor Teskey, the chief executive officer of Brookfield Renewable. It will invest in solar power and other technologies that reduce greenhouse-gas emissions.

“With the global carbon budget being rapidly run down, now is the time for comprehensive, determined action,” Carney said in an emailed statement. “That means deploying capital across the economic spectrum from scaling clean energy generation, to transforming traditional utilities and to providing sustainable solutions for heavy industries like steel and cement.”

Brookfield will focus the fund on “investments that accelerate the global transition to a net-zero carbon economy,” according to the statement. That’s a fairly loose definition to be applied on an individual basis, according to a spokesman.

The fund could, for example, invest in a portfolio that includes both natural-gas plants and renewables, as long as there’s an opportunity to use the capital to expand the renewables business and deliver decarbonization that wouldn’t have happened otherwise. So far, the fund hasn’t invested in any fossil-fuel assets.

The fund has more than 100 investors, with Toronto-based Brookfield being the largest one, according to the statement.

The size of the fund is a testament to the continued attractiveness of renewable power even as fossil-fuel prices surge. Global investors and utilities will need to step up the deployment of renewable energy in coming years if the world is to have a chance to reach net-zero emissions by 2050 and prevent the most catastrophic effects of climate change.

Brookfield already has agreements to spend about $2.5 billion from the fund. That includes acquisitions of US and German solar power and battery developers with a combined pipeline capacity of 25 gigawatts, an investment in a carbon capture-and-storage developer, and a partnership to develop solar and battery-storage projects in the UK.