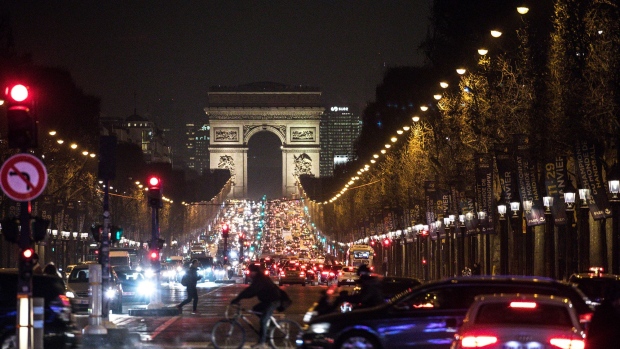 Vehicles sit at traffic lights as the Arc de Triomphe stands beyond at night in Paris. , Photographer: Christophe Morin/Bloomberg

Mourad has joined Raine as a partner, he said in an interview. The advisory firm is hoping to capture more opportunities in the French technology industry, which is growing at an extremely fast pace with more than 20 startups reaching so-called “unicorn” status, according to Mourad.

The banker has most recently been acting as an angel investor and chairman of social content platform Loopsider. He was previously head of global corporate and investment banking for France at Bank of America and chairman of billionaire Patrick Drahi’s Altice Media.

Mourad also served as a managing director on Morgan Stanley’s technology, media and telecommunications team and was a special adviser to French president Emmanuel Macron during his last electoral campaign. Since coming into power, Macron has pushed to make France into a “startup nation” by making the country more attractive to foreign investors and ramping up funding schemes.

“We have been extremely impressed by the commitment France has made to entrepreneurship within TMT and see the progress via an emerging cohort of some of Europe’s most exciting companies,” said Jason Schretter, head of Europe, the Middle East and Africa at Raine. “We want to be a bigger part of that evolution.”

Tech-related takeovers have surged to more than $300 billion globally so far this year, on track for an annual record, according to data compiled by Bloomberg.

Raine advised SoftBank Group Corp. on its 2016 acquisition of Arm Holdings Plc and its eventual sale of the business to Nvidia Corp. It also worked with City Football Group, owner of the Manchester City soccer team, on the sale of a stake to private equity firm Silver Lake and helped arrange capital raises for health technology platforms Elvie and BenevolentAI.