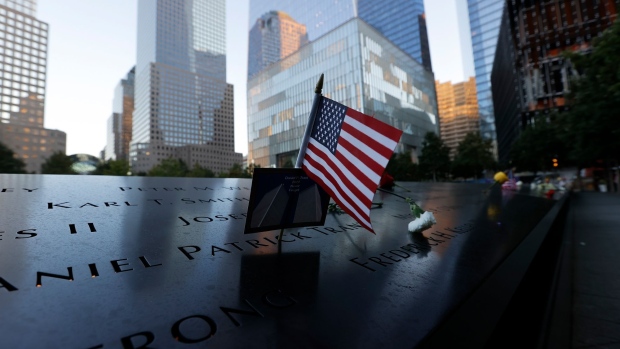 NEW YORK, NEW YORK - SEPTEMBER 11: A detail of the 9/11 Memorial is seen before a ceremony at the National September 11 Memorial & Museum commemorating the 20th anniversary of the September 11th terrorist attacks on the World Trade Center on September 11, 2021 in New York City. The nation is marking the 20th anniversary of the terror attacks of September 11, 2001, when the terrorist group al-Qaeda flew hijacked airplanes into the World Trade Center, Shanksville, PA, and the Pentagon, killing nearly 3,000 people. (Photo by Mike Segar-Pool/Getty Images) , Getty Images

(Bloomberg) -- A former Cantor Fitzgerald LP broker was barred from bringing up 9/11 as part of his defense against SEC charges that he illegally split commissions with another employee.

Adam Mattessich can’t question witnesses about the impact of the terrorist attacks on Cantor, a federal judge in Manhattan ruled Wednesday, because the issue has no bearing on the Securities and Exchange Commission’s case against him and could inflame the jury.

“I remain concerned about bringing 9/11 into a case where I don’t see its relevance,” said U.S. District Judge Katherine Polk Failla. Mattessich is tentatively scheduled to go on trial on Feb. 2.

The SEC sued Mattessich in 2018 for allegedly spitting commissions with Joseph Ludovico, another trader on the firm’s international equities desk, circumventing his supervisor’s 2002 decision on the matter.

Cantor lost the majority of its New York staff in the World Trade Center, and Mattessich had argued that questioning witnesses about 9/11 would help jurors understand why he thought he was authorized to split commissions based on a conversation with then-Cantor Fitzgerald Chief Executive Officer Phil Marber.

“Everything that happened at Cantor was colored by the events of 9/11” for several years,” Mattessich said in a court filing, adding that he expected Marber to testify that he “was stretched to his limits trying to save Cantor from collapse and had no time to discuss in any detail requests for changes in account coverage.”

The SEC argued that “no anticipated evidence links the impact of the attacks on the relevant Cantor commission-recording systems years later in 2004, when Mattessich first began receiving off-the-books commissions from Ludovico.”