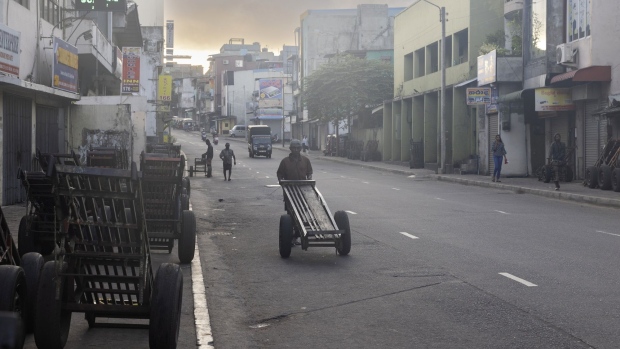 A worker with an empty two-wheeled cart makes his way to a wholesale market to find jobs in Colombo, Sri Lanka, on Tuesday, Aug. 9, 2022. Sri Lanka’s new President Ranil Wickremesinghe this month called on lawmakers and citizens to support his administration’s reform measures to help pull the nation out of its economic tailspin and negotiate a bailout program from the International Monetary Fund. , Bloomberg

(Bloomberg) -- Bond investors who push lopsided ESG agendas on impoverished nations risk harming some of the world’s most vulnerable populations, according to the head of impact at climate finance advisory firm Pollination Group.

Zoe Whitton, who was a head of environmental, social and governance research at Citigroup Inc. after stints at Credit Suisse Group AG and Bank of America Corp., says the economic crisis in Sri Lanka is a case in point, as some creditors try to tie its debt restructuring to climate goals. Applying such corporate engagement tactics to struggling sovereign nations could be inappropriate for a number of reasons, she said.

“If private investors engage with sovereign climate risk extensively, they may affect capital availability for nations which are already vulnerable,” Sydney-based Whitton said in an interview. “Developing countries aren’t responsible for the challenges they face and may have a reduced capability to mitigate climate risks.”

It’s a concern that’s increasingly making its way into the ESG debate as policies designed to alleviate poverty sometimes appear to clash with the longer-term objectives of fighting climate change.

Yet making debt relief contingent on climate goals is becoming a popular strategy in sovereign creditor talks. Belize and its bondholders, with the help of US charity the Nature Conservancy, last year agreed a $553 million restructuring that saw the government commit to spending millions on marine conservation.

Such deals can in principle relieve a nation’s debt burden in return for environmental commitments. Yet there’s a power imbalance between a distressed debtor representing an impoverished population and asset managers from rich countries, which Whitton characterizes as problematic.

Sustainable finance is less advanced in sovereign debt markets than in the corporate world, where investors apply an array of strategies under the rubric of ESG. But metrics and models designed for corporations don’t easily translate to governments. For example, ESG scores for countries -- insofar as they even exist -- have been criticized for being correlated to a nation’s wealth, potentially penalizing poorer countries.

In her role at Pollination, which advises investors, companies and governments on climate finance and has an investment venture with HSBC Holdings Plc, Whitton questions the wisdom of allowing creditors to become so powerful as to dictate policies to entire nations.

“When asset managers come in and say, ‘We’re going to make demands regarding your national policy,’ the context is completely different from when they make demands on corporations,” she said. “There are ethical and reputational risks for investors who use engagement to coerce policy making at a national level, particularly for developing economies.”

More broadly, how ESG investors should treat emerging markets has triggered a renewed wave of debate since the war in Ukraine. Russia’s invasion has forced the ESG industry to review strategies that in numerous cases left investors exposed to autocratic regimes.

Yet many of the world’s poorest nations are ruled by autocrats, and an emerging-market exodus of ESG funds risks hitting places most in need of support, according to Edward Mason, a director at Generation Investment Management, which was co-founded by Al Gore. He has urged ESG investors to keep an eye on the “bigger picture” when looking at the needs of the developing world.

One answer, according to Whitton, would be for bond investors to push for so-called climate shock and natural disaster clauses, which give governments a break from principal and interest payments in the event that calamity strikes. That would help countries when their sovereign finances are most vulnerable, she said. Such clauses are already starting to appear, with Caribbean nations Barbados and Grenada both benefiting from the development in recent years.

“If you decide to divest or push for stringent conditions, you can reduce the country’s access to capital and increase the risk it won’t be able to respond properly to climate change,” she said. “You can actually make the risk exposure of a sovereign worse.”

(Updates with detail on natural disaster clauses in second-last paragraph)