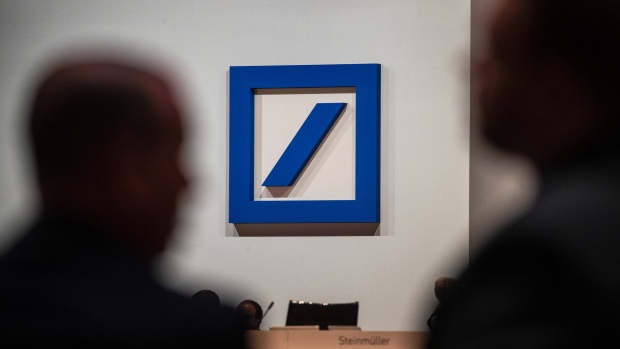 Attendees wait for the start of the Deutsche Bank AG annual general meeting in Frankfurt, Germany, on Thursday, May 23, 2019. Deutsche Bank’s leadership on Thursday will face investors exasperated by years of low profit and a falling share price. , Bloomberg

(Bloomberg) -- A former Deutsche Bank AG executive sent Christian Bittar, a former banker convicted of manipulating a key interest rate, an electronic message saying “YES WE WILL DO” after receiving a request to set the benchmark at a particular level, prosecutors said.

Andreas Hauschild, a former senior banker in Frankfurt, sent the message to Bittar in response to a plea to “HELP US AND PUT A LOW 1MTH FIXING?" The exchange was shown to jurors by prosecutors Wednesday during Hauschild’s third day of testimony in a London court.

Hauschild is charged with conspiring with Bittar and traders at Barclays Plc to fix the benchmark Euribor rate, which is tied to trillions of dollars worth of loans and derivatives. The SFO investigation was part of a wider probe into benchmark rates, the most famous of which was Libor.

But the 54-year-old trader, who denies the allegations, disputed the prosecutor’s characterization of the messages. Hauschild said the comments were part of a broader conversation on the market.

“For me it was just reflecting, we were doing things unchanged,” Hauschild said about the message.

Hauschild said some of his former colleagues were wrong to say they’d help Bittar. He’d found out about some of their actions when he saw documents from prosecutors, he said.

He said that if Bittar assumed he would help, in reality he “would not do it.”

James Waddington, the prosecution lawyer, asked Hauschild whether he was saying that “when you gave Mr. Bittar the answer ‘Yes we will do,’ you weren’t actually meaning to say you were going to help him make money on his position by putting it low.”

Hauschild said this was correct, and the excerpt had been taken out of context.

To contact the reporter on this story: Kaye Wiggins in London at kwiggins4@bloomberg.net

To contact the editors responsible for this story: Anthony Aarons at aaarons@bloomberg.net, Christopher Elser