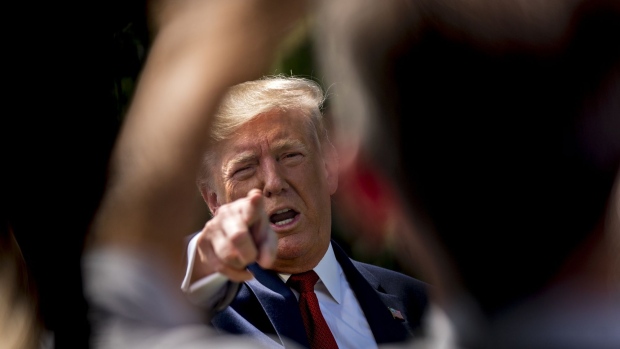 U.S. President Donald Trump takes a question while speaking to members of the media before boarding Marine One on the South Lawn of the White House in Washington, D.C., U.S., on Wednesday, Aug. 21, 2019. Trump said he canceled his trip to Denmark after a "nasty" comment by the country's prime minister. , Bloomberg

(Bloomberg) -- A former senior US Justice Department official with a record of challenging Donald Trump and his company has joined Manhattan District Attorney Alvin Bragg’s office to focus on white collar investigations.

Colangelo, who was named senior counsel to the DA, will support the office’s “focus on financial crimes” to “promote confidence in the legal system by making clear that the same rules apply to everyone -- no matter how powerful,” Bragg said. He said Colangelo will also focus on tenant and worker protection.

Bragg’s office has been prosecuting a pair of Trump Organization business units in a criminal tax fraud case in which the jury began deliberating Monday. Bragg has said his office’s investigation of Trump is ongoing, despite the departure of two of his most senior prosecutors in February.

Trump, who is running for president in 2024, has called the various cases and probes facing him and his company baseless political vendettas.

Colangelo, a graduate of Harvard Law School, served as deputy assistant to the president in Barack Obama’s administration and as deputy director of the National Economic Council.