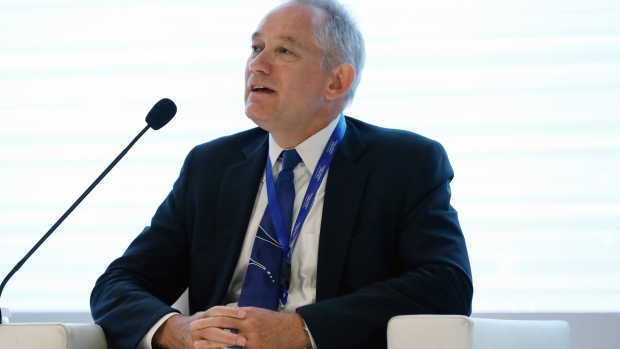 Simon Potter, executive vice president and head of markets at the Federal Reserve Bank of New York, speaks during the Central Banking Forum on the sidelines of the International Monetary Fund (IMF) and World Bank Group Annual Meetings in Nusa Dua, Bali, Indonesia, on Wednesday, Oct. 10, 2018. Policymakers led will discuss the spillover impact of global economic and financial conditions and how normalization in advanced countries impacts emerging markets at the forum, according to Bank Indonesia Governor Perry Warjiyo. , Bloomberg

(Bloomberg) -- Bank of England Governor Mark Carney’s plan to end the dollar’s dominance in the global financial system ignores the benefits of having the greenback as a reserve currency, according to former senior Federal Reserve official Simon Potter.

The dollar should eventually be replaced by something like Facebook Inc.’s proposed Libra cryptocurrency, Carney said last month. While the Bank of England chief bemoaned the greenback’s “domineering influence” on trade, he failed to take into account how the dollar’s status has benefited other countries, Potter said at a Peterson Institute for International Economics event in New York on Wednesday.

“I see no argument that makes sense to have something that complicated out there when you have large, liquid capital markets in the U.S.,” Potter, who ran the New York Fed’s trading desk, said in his first public remarks since departing in June. “Not having one currency that you can basically price things and have a deep market in, that makes life much harder for the global economy.”

The dollar’s role in the global financial system is vast: other countries use it to pay international debts, and it commands the lion’s share of central banks’ foreign-exchange reserves. That status has afforded the U.S. several advantages: foreign investors have flocked to dollar-denominated assets, helping America keep a lid on its borrowing costs.

Carney and Potter do see eye-to-eye on one point: policy makers should keep control of the currency system. While Facebook’s Libra could lie outside the purview of central banks, Carney argued in August that the public sector would be the best provider of a new currency hegemony.

Potter agrees. While it’s unlikely that “individual sovereigns could ever coordinate” around a virtual currency, the risk is that companies might.

“Central banks should be very concerned about the private sector doing this,” Potter said. A nation’s control of its currency “is designed to protect people and get good outcomes. The private sector is much more interested in selling products.”

To contact the editors responsible for this story: Benjamin Purvis at bpurvis@bloomberg.net, Nick Baker, Elizabeth Stanton