A duo of ex-corporate lawyers turned money managers in Canada are sounding the alarm on the rally seen across most asset classes after their fund outperformed most of its peers this year.

LM Asset Management, a Vancouver-based, value-oriented fund, saw its sole fund return 53 per cent in the first half of 2021, driven mainly by investments in commodity producers, such as Antero Resources Corp. By comparison, the HFRI Equity Hedge Fundamental Value Index, which aggregates money managers who look for opportunities based on discounted valuations, returned 17 per cent as of June 30.

LM Asset’s net cumulative return is about 265 per cent since its inception in July 2017, according to a recent investor presentation seen by Bloomberg. It remains a small fund, with about $80 million (US$64 million) in assets under management.

“We are concerned about markets being at frothy levels and we want to continue to invest, as it is important to protect the purchasing power of our capital with the significant price inflation of many asset classes -- but at the same time we want to stay defensive,” Chief Investment Officer Daniel Lau said in a recent interview.

Lau and Christine Man, LM’s chief executive and co-founder, are former lawyers who previously worked together at McMillan LLP’s Vancouver office where Lau was a securities M&A lawyer and Man was a corporate tax-law partner.

The duo believes most asset classes are overvalued and intends to tread cautiously for the next 12-months, continuing to keep 20 per cent of its holdings in cash to deploy if there is a major market selloff while maintaining its investments in undervalued companies to help protect the fund’s purchasing power, Lau said.

One of the main performance drivers for the fund was Denver Colorado-based natural gas producer Antero Resources, which LM identified as an opportunistic bet in October of 2019, Lau said. Antero stock has since risen more than 400 per cent and the fund has trimmed some of its position. The fund invested in other energy producers as well, and in base and precious metals companies. 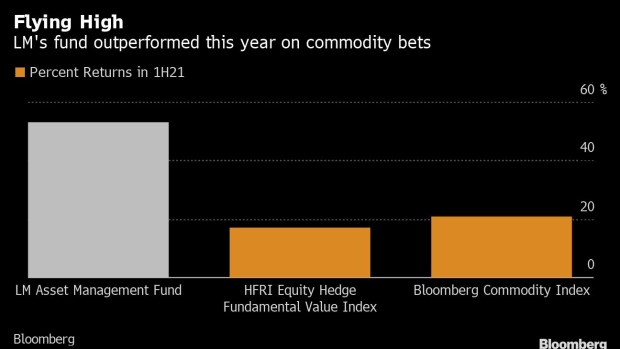 Commodities, from oil to copper, saw record high prices this year, driven by strong demand and pandemic related supply shocks. The Bloomberg Commodities Spot Index, a measure of 22 raw material prices, is up more than 50 per cent from the March 2020 low when the pandemic first hit and 20 per cent so far this year.

“Our investment thesis was not predicated on the inflation but rather the ‘supply narrative,’ where there is just not enough supply in the current environment to meet demand. For this reason, we believe there is still significant upside to being in the commodities sector”, the duo wrote in a letter to their investors.

Despite its winning bets on commodities producers, LM is a “sector agnostic” generalist fund, Man said. It also has investments in utilities, renewable energy and consumer goods manufacturers, she added.