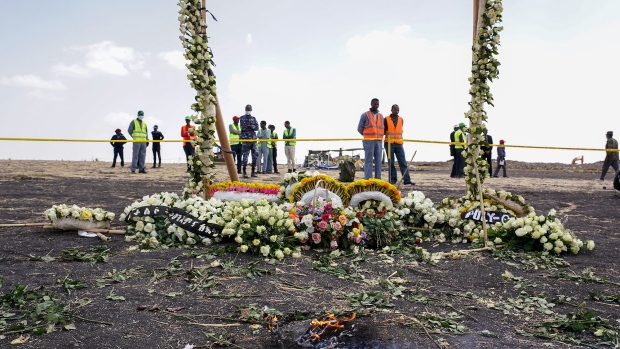 (Bloomberg) -- A former engineering manager at Ethiopian Airlines has filed a complaint with international aviation regulators alleging shortcomings with the operation of the airline prompted by a deadly crash of one of its Boeing Co. 737 Max jets in March.

Yonas Yeshanew, the director of aircraft engineering at Ethiopian Airlines before resigning in August, described what he said is a pattern of cutting corners to keep pace with demanding flight schedules, according to a copy of the complaint he provided Bloomberg News. He said someone at the airline improperly accessed maintenance records of the jet after the crash, in which 157 people were killed after takeoff from Addis Ababa on March 10.

The airline didn’t respond to a request for comment left after business hours. In its response to the Associated Press, which reported earlier Monday about the complaint, the airline called Yeshanew a “disgruntled ex-employee” and denied having a history of shoddy maintenance.

The airline told the AP that as soon as the March accident happened, maintenance documents were sealed, stored in a secure place and delivered to Ethiopia’s Aircraft Accident Investigation Bureau. It added that while “a technician tried to see the aircraft records,” its review found no data was changed or updated.

Yeshanew sent his complaint to the U.S. Federal Aviation Administration, the European Union Aviation Safety Agency and International Air Transport Association, a trade group. The FAA received the complaint on Sept. 19 and is looking into it, the agency said in an emailed statement. The agency declined further comment. The other agencies didn’t respond to messages asking if they had received the complaint.

“The brutal fact shall be exposed as Ethiopian Airlines is pursuing the vision of expansion, growth and profitability by compromising safety,” Yeshanew said in the 180-page document, which includes supporting records.

Yeshanew’s attorney, Darryl Levitt, said his client fled Ethiopia with his family and is now seeking asylum in the U.S.

“There are systemic problems at Ethiopian Airlines,” Levitt said. “Yonas has taken a courageous step to highlight those issues and his motivation is to assist in making airline travel safer, and to call out the problems he saw in Ethiopia. It’s a public interest issue.”

The 737 Max has been grounded worldwide since March 13, three days after the Ethiopian Airlines crash that has been linked to a flight-control computer system that failed and erroneously commanded the plane to dive. The same malfunction is suspected in an October 2018 crash of a 737 Max off the coast of Indonesia.

Investigators have focused on the system, known as the Maneuvering Characteristics Augmentation System, which Boeing is redesigning as it seeks to win approval to return the jet to service. The Chicago-based planemaker has said, “safety, quality and integrity are at the core of Boeing’s values.”

An Ethiopian Airlines repair station in Addis Ababa, which was authorized to work on U.S. aircraft, used unqualified mechanics and didn’t follow a host of regulatory requirements, according to a 2016 audit by the FAA that was included with the report by Yeshanew.

“The inspection was not completed due to the amount of discrepancies found and the subsequent inspections,” the FAA inspectors said. The FAA audit didn’t include a response from Ethiopian Airlines.

Yeshanew is the second former employee of Ethiopian Airlines to come forward to express concerns about the carrier’s practices. Bernd Kai von Hoesslin, a former 737 captain at Ethiopian Airlines who resigned last spring, alleged in interviews earlier this year that there were shortcomings in maintenance and record keeping.

Von Hoesslin said he urged his superiors in December to bolster training on a 737 Max flight-control feature so crews would be better prepared for something like what the Lion Air pilots encountered in October before plunging into the Java Sea, killing all 189 aboard.

Ethiopian Airlines has previously said it strictly complies with all global safety standards and regulatory requirements and was one of the first airlines in the world to purchase a 737 Max flight simulator for training.

It has also disputed concerns previously raised by von Hoesslin related to pilot training and maintenance as “false and factually incorrect.”