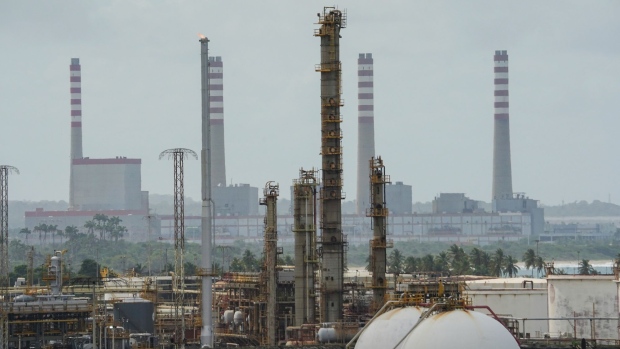 The Petroleos de Venezuela SA (PDVSA) El Palito refinery in El Palito, Venezuela, on Wednesday, March 9, 2022. The prospect that the U.S. could ease sanctions on Venezuela's state oil producer to offset Russia's cutoff from global markets has observers wondering how much crude the South American nation is able to add to a market roiled by the war in Ukraine. Photographer: Manaure Quintero/Bloomberg , Bloomberg

(Bloomberg) -- A former Miami congressman was arrested on charges that he engaged in consultancy work for a US unit of PDVSA as a front for acting as an agent of the Venezuelan government.

David Rivera, who was arrested at an airport in Atlanta on Monday, allegedly tried to influence US foreign policy towards the South American country without registering as a foreign agent, according to an indictment unsealed Monday by federal prosecutors.

A Republican who served in office from 2011 to 2013, Rivera has been the subject of lawsuits and investigations over the past two years, including for a contract he signed through his firm, Interamerican Consulting, with the US subsidiary of Petroleos de Venezuela SA.

Rivera, whose lawyer didn’t immediately respond to a request for comment, has previously denied wrongdoing and called the accusations against him “politically motivated fake news.”

According to the indictment, Rivera and Esther Nuhfer, a lobbyist, were approached in 2017 to lobby the US in a bid to normalize relations between the two countries and prevent further sanctions against President Nicolas Maduro.

The Venezuelan Minister of Foreign Affairs at the time, Delcy Rodriguez, directed executives at CITGO, a Texas-based unit of PDVSA, to draw up a consulting contract with Rivera’s company, according to the indictment.

The contract was between Interamerican and PDV USA, which prosecutors allege was used by CITGO to facilitate “special projects” ordered by executives of the state-owned parent company.

Rivera arranged for an unidentified US congressman to travel to Venezuela and meet with Maduro about normalizing relations between the countries in exchange for a promise to hold free and fair elections, according to the indictment.

PDV USA alleged in a lawsuit filed in federal court in 2020 that Rivera was initially in line to take home a $50 million fee for three months of work aimed at fostering relationships with US policymakers, but performed “no meaningful services” beyond producing two reports totaling no more than five pages. The company said he was only paid $15 million.

Though Rivera entered into the deal while PDV USA was controlled by Maduro’s government, the subsidiary was overseen at the time of the lawsuit by opposition leader Juan Guaido, whom the Trump administration recognized as Venezuela’s interim president in January 2019.

Guadio-appointed board members filed the suit seeking the return of the $15 million paid to Rivera.