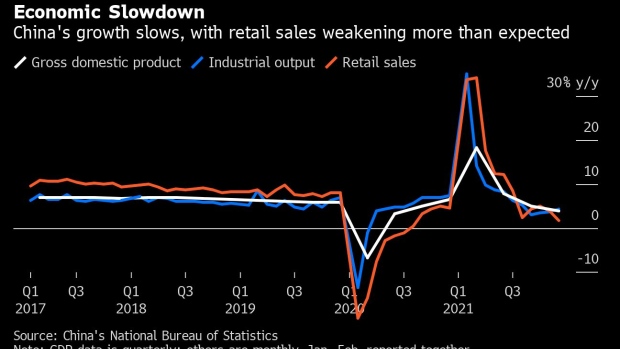 (Bloomberg) -- China’s central bank has only a few months to ease monetary policy to spur the economy while preventing excessive credit flowing into the property sector, a former central bank official said.

Authorities should step up counter-cyclical policy to shorten the time until economic growth bottoms out, Sheng Songcheng, a former director of the People’s Bank of China’s statistics and analysis department, said in an interview Tuesday.

Inflation could trend higher in the second half of the year and interest rate hikes from the U.S. Federal Reserve in coming months could put the yuan under pressure, limiting the PBOC’s actions later in the year, he said.

“The best way is to make use of the current window, which could last for three or four months, to continue with marginal easing while avoiding flood-like stimulus,” said Sheng, who is now a professor at the China Europe International Business School in Shanghai.

A slowdown in the economy has pushed the PBOC into easing mode, with the central bank cutting interest rates this week and pledging to open its policy tool box wider. Beijing is keen to stabilize growth in a crucial year of leadership transition as challenges mount from spreading omicron outbreaks to a continued slump in property sales and investment.

On property policy, Sheng said the recent relaxation of rules regarding lending to the sector is to prevent risks and ensure stable and healthy growth of the industry.

“It’s impossible for China to follow the old path of stimulating growth significantly through property,” he said.

There’s still plenty of room for the PBOC to ease monetary policy marginally since China didn’t undertake massive stimulus during the pandemic, according to Sheng.

In contrast, other major central banks, like the Fed, are in tightening mode, which narrows the window for the PBOC to act. The yuan will face depreciation pressure in the second half of the year as rate hikes from the Fed narrows the yield differential between China and the U.S., potentially leading to capital outflows, said Sheng.

“One of the reasons I suggest adopting easier macro policies as soon as possible is to minimize the impact of Fed’s policy tightening, and to make the most use of the time gap,” he said.