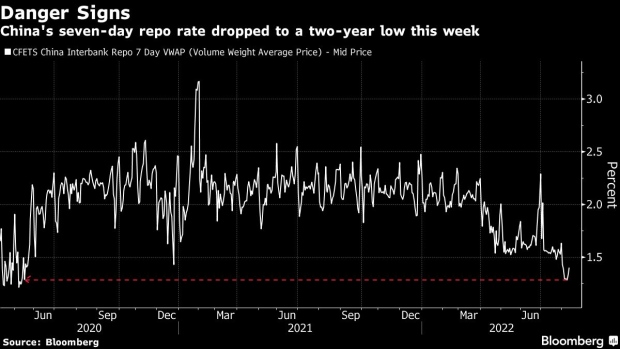 Pedestrians cross a road in Pudong's Lujiazui Financial District in Shanghai, China, on Monday, June 20, 2022. Shanghai’s weekend Covid-testing blitz found the virus seemingly contained, after a spike in cases last week had fanned concern the city would be plunged back into lockdown. Photographer: Qilai Shen/Bloomberg , Bloomberg

The increase in leverage would widen the duration mismatch between liabilities and assets for banks and make the financial system more vulnerable once liquidity eventually begins to tighten, he said in an interview with Bloomberg.

China’s interbank seven-day repurchase rate -- a gauge of short-term borrowing costs between financial institutions -- dropped to a two-year low this week, adding to concern about excessive liquidity building up in the financial system rather than being lent to corporates and households. A surge in overnight cash trading among banks also suggests more funds are being funneled into bond carry trades.

At the same time, both Citigroup Inc. and Morgan Stanley both said this week that bets on continuing abundant liquidity in China may unwind as repo rates have limited room to keep falling.

Plentiful liquidity may also trigger arbitrage behavior among corporations and distract them from focusing on their core businesses, according to Sheng. Although lower borrowing costs benefit corporate issuers, some of them may invest the proceeds into higher-risk financial products rather than invest the cash in expanding their businesses and boosting the real economy, he said.