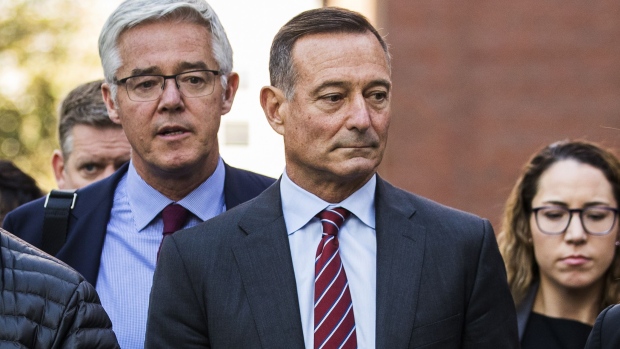 Former Pimco chief Douglas Hodge, who got the toughest sentence of all the parents so far in the U.S. college admissions scandal, snatched prized places away from honest applicants knowing it was all a fraud, prosecutors said in urging a judge not to reconsider his plea.

“Hodge paid bribes, to individuals and to university athletic programs, to have his children recruited as athletes when they were not,” they said in a filing late Friday. “The Hodge children did not ‘obtain favorable consideration.’ Hodge stole admission slots for them from deserving applicants using illegal payoffs.”

They cited an article Hodge published on the Wall Street Journal’s opinion page shortly after his February sentencing in which he wrote, “I bought into what I thought was a win-win-win — a win for the universities, for my children and for other people’s children,” calling it a transparent effort to dress up cheating “as a magnanimous act.”

Hodge was sentenced to nine months in prison after admitting he paid US$850,000 in bribes to get four of his kids into the University of Southern California and Georgetown University as phony soccer and tennis recruits, part of a sprawling case in which three dozen parents have been charged, two of them just this month.

Now he may get a rare chance at re-sentencing as U.S. District Judge Nathaniel Gorton weighs Hodge’s bid to set aside part of his guilty plea because prosecutors sat on evidence that might have helped his defence — an error the judge said made for “extraordinary circumstances.”

Hodge, who like the other parents hired admissions strategist William “Rick” Singer to get their kids into elite schools from USC to Yale, seeks to withdraw his plea to money-laundering conspiracy and be sentenced only for fraud conspiracy.

“This is not ‘branding,’” they said, referring to Hodge’s article, titled “I Wish I’d Never Met Rick Singer.” In it, he said Singer promised to “create a ‘brand’ for my child to help separate our application from the legions of others.”

“It is fraud,” the government said.

Brien O’Connor, a lawyer for Hodge, didn’t immediately respond to requests for comment on the filing that were left by voicemail and email outside office hours.

Two and a half weeks after Hodge was sentenced, and almost a year after prosecutors announced the case, they disclosed for the first time that Singer had taken notes on his phone that Hodge says are exculpatory. In the notes, Singer, who pleaded guilty and has cooperated with the government, said he felt pressured by investigators to lie to parents on secretly recorded calls to fabricate evidence against them.

The U.S. says that Singer has retracted the claim and that the phone calls show the parents knew they were engaging in fraud or bribery. Gorton this month rejected other defendants’ bid for a new trial based on the notes, finding that the government should have turned them over sooner but that the error “has not unduly prejudiced these defendants.”

More than 50 people have been charged in the case. Of the 38 parents, 26 have admitted guilt. Their sentences have ranged from two weeks for “Desperate Housewives” star Felicity Huffman to the nine-month term, plus a US$750,000 fine, for Hodge. None of the students or colleges swept up in the scandal have been charged.

The dozen parents fighting the charges are still facing trial, in two groups. The first trial — which was to include “Full House” star Lori Loughlin and her husband, fashion designer Mossimo Giannulli, before they pleaded guilty — was scheduled to start Oct. 5, subject to the court’s reopening amid the coronavirus pandemic. The second, beginning Jan. 11, includes private equity executive Bill McGlashan.

“Judge Gorton is very interested in having this trial take place in October, and at this time that schedule is firm,” U.S. Magistrate Judge Page Kelley said in a videoconference on Friday.

Kelley said the court “is working very hard to balance the public safety issues with social distancing and how to arrange people, especially jurors.”