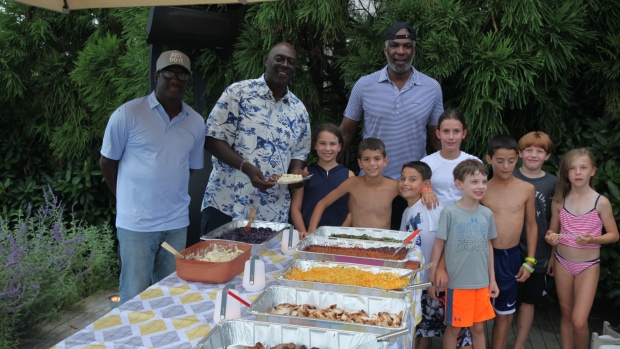 John Stephens, OJ Anderson and Charles Oakley (right) hang out with kids at a dinner at the home of CIBC’s Eric Price. The event was the result of Price winning a charity auction at a golf tournament. , Bloomberg

A lifeguard watched the girl in cat-eye goggles swim laps as the basketball court filled with sweaty dads. A waiter patrolled the deck pouring rose, while inside the house Charles Oakley spiced jerk chicken and sauteed purple cabbage.

On Wednesday evening, Oakley, the former New York Knicks power forward, was in charge of dinner at the home of CIBC’s Eric Price in Bridgehampton. Price bought Oakley’s services in an auction at a charity golf tournament, and picked a late August afternoon to bring him to his Norman Jaffe home to prepare a kid-friendly feast for friends including Mark Black of Corvid Peak Capital, CIBC’s Fred Gourtay and Brian Eizenstat.

The kitchen table was filled with other former professional athletes: OJ Anderson and Stephen Baker, who both played for the New York Giants, and John Starks of the Knicks. Price rented the house next door for their stay, and arranged for them to play golf at Sebonack and Atlantic before dinner.

Well, Price did melt some butter, but mainly he made sure the kids got to meet the athletes.

“Stand on the stairs so you look tall,” Anderson told the daughter of Lesley and David Schulhof. “You look like a princess.”

The Prices’ donation to host the experience supports a college scholarship fund started by Anderson. This year, 24 graduating high school seniors received grants of about $3,500 each, according to Marc Goldberg, who helps run the New Jersey component of Anderson’s foundation.

When dinner was served on the back deck, Anderson thanked the Prices for hosting and declared himself “first taster.” He also explained why he started the scholarship.

Price started working with athletes as a coordinator of CIBC’s charity trading day. He brought several athletes including Anderson to the Robin Hood Foundation benefit in May.