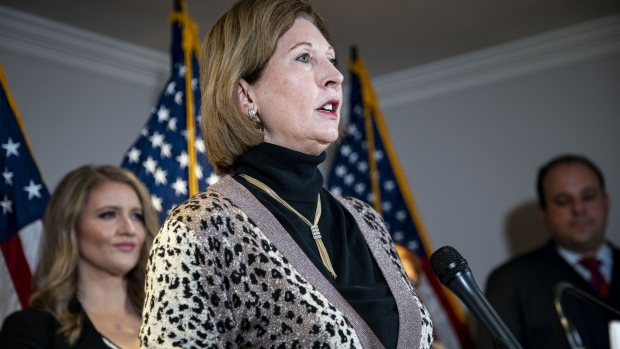 (Bloomberg) -- Former Trump campaign lawyer Sidney Powell sued the voting-technology company she falsely accused of rigging the 2020 presidential election, accusing it of trashing her reputation by taking her to court.

Powell, in a series of counterclaims filed late Friday against Dominion Voting Systems Inc., claimed the company’s earlier $1.3 billion defamation suit against her was a “ludicrous” abuse of the legal system intended to intimidate her for speaking out. She’s seeking at least $10 million in damages.

The Texas-based lawyer is the architect of a debunked conspiracy theory that Dominion worked with corrupt election workers, communists and foreign hackers to flip millions of votes away from former President Donald Trump in November. The theory was at the center of a series of lawsuits she filed in key swing states to overturn the election, all of which failed.

Dominion’s motive in suing was “diverting attention from the failings of its election equipment, trying to change the ‘narrative’ that was exposing Dominion’s serious flaws and wrongdoing, and avoiding post-election inquiry into voting irregularities in the 2020 election,” Powell said in the filing.

Powell has never provided evidence of such failings or irregularities, and state election officials have rejected the allegations.

Powell, an outspoken Trump supporter, may have a hard time convincing the Washington judge overseeing the case that Dominion’s lawsuit is improper. The judge in August denied Powell’s motion to dismiss the lawsuit, criticizing her for depending on unreliable “expert witnesses” and anonymous affidavits to back her conspiracy.

Denver-based Dominion also has suits pending against Trump lawyer Rudy Giuliani and MyPillow Inc. Chief Executive Officer Mike Lindell for spreading the false claims on television. The company has sued Fox News, Newsmax Media Inc. and the owner of One America News Network, accusing them of creating an “alternate reality” for Trump supporters.

Powell, whose claims include that Dominion was linked to former Venezuelan President Hugo Chavez, was hit with sanctions in her Michigan lawsuit to overturn the election after a judge ruled she had abused the legal system. The judge in that case ruled Powell’s suit was so flimsy it amounted to “a historic and profound abuse of the judicial process.”